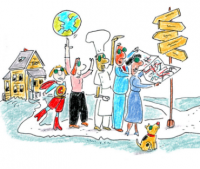 When we hear the words “intentional community,” we may think of residential communities like back-to-the-land communes and urban housing co-ops. But you don’t have to live in the same house to have a shared vision and make an impact.

A non-profit called Cool Block brings entire neighborhoods together to support each other and build community over shared environmental goals. David Gershon, the founder of Cool Block, describes it like this:

“The Cool Block program is 9 meetings over approximately 4-and-a-half months, that help people learn carbon reduction, water stewardship, disaster resiliency, livability, and empowering others. It is so simple and so profound.” 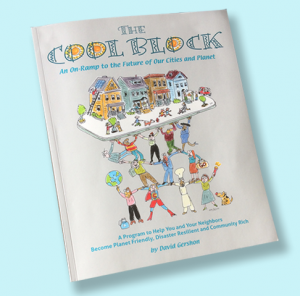 articipants follow along with the Cool Block handbook, which includes 112 action items to choose from. The programs are self-directed, with some actions intended for individual households and some for the whole block. It’s designed for up to 8 households to participate at once.

So far, the program has launched in Los Angeles, San Francisco, and Palo Alto, and is rolling out to more cities this year. It’s received praise from citizens and local leaders alike. California’s Lt. Governor Gavin Newsom calls it an “exemplary how-to guide for local communities to make a significant impact on climate change.”

A related project, the Cool City Challenge, is even more ambitious: participating cities will aim to get 25% of residents involved in the program. James Keene, the City Manager of Palo Alto, says that “Cities are the platform for change in our world today. The Cool Block links the challenges facing our planet to the intimate, personal, social scale of the city block.”

Communities can tailor the program to meet specific needs, such as caring for elderly residents or setting up a tool-sharing agreement. According to Shareable, “By partnering with cities, Cool Block organizers also raise awareness about resources that people may not know about, including rebates for solar energy, community classes, block organizing initiatives, and party packs people can share.”

Want to learn more about the Cool Block program and see if it’s right for you and your neighborhood? Check out the intro video below and visit the Cool Block website to see how you can get involved: