Deborah Altus lives in Lawrence, Kansas. She is a professor at Washburn University, a board member of the International Communal Studies Association, and former member of the editorial review board for the FIC. 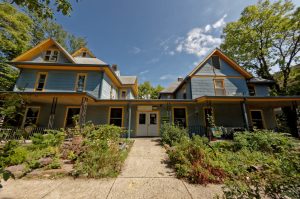 In the 1980s, I lived in a housing co-op (Sunflower House) inspired by B. F. Skinner’s novel, Walden Two.  I wanted to learn more about Walden Two communities and started to visit them.  These visits included East Wind, Twin Oaks, Lake Village and Comunidad Los Horcones in Mexico.

I first heard about the FIC around the same time because one of my friends at Sunflower House went to the initial meetings about resurrecting the organization. He met Laird at these meetings and told me about a consensus workshop that Laird was conducting at East Wind. I returned to East Wind to attend the workshop and learned more about the FIC. Then, around the same time, I started attending Communal Studies Association conferences. Several of these conferences were held in conjunction with FIC meetings. I remember one meeting, in particular, that was held at Hancock and Mount Lebanon Shaker Villages. FIC members stayed in one of the lovely old Shaker buildings at Mount Lebanon.  Watching people make dinner in the kitchen brought the Shaker Village to life and gave me a strong sense of the continuity of communal efforts over time.

When I attended the FIC meeting at High Wind in the early 1990s, I was asked to be an associate board member. Geoph, who had become a frequent visitor on his trips through Kansas, encouraged me to guest edit a couple of special issues of Communities magazine on the topics of women in community and aging in community.  This eventually led to serving on the Editorial Review Board for the FIC, a position I held for around 15 years, and to my current position on the Kozeny Award Committee.

At the FIC meeting at High Wind, I looked around the circle of participants and had the profound sense that I had finally found my people. Friendships that deepened at that meeting continue to the present day, as does my commitment to supporting the FIC and its work.  I’ve been amazed at the capacity of a decentralized organization like the FIC to accomplish enormous tasks, such as the Directory and ic.org website, on a shoestring budget.  This shows the depth of commitment of FIC members to this important work.  Here’s to another successful 30 years of creating community and promoting a more just, peaceful, and sustainable society.

Ma’ikwe serves on the Board of the FIC and is the former Executive Director of both the Center for Sustainable and Cooperative Culture at Dancing Rabbit Ecovillage, and Commonomics USA, an economic justice organization.

FIC and I are in the activist equivalent of a long term relationship. It’s certainly not monogamous: a lot of other people are also in that same relationship, and I do activism both for a living and as a volunteer with a number of other groups. But FIC is my longest love, and like all good long-term things, we’ve been through a lot of phases together.

I was first drawn to this organization for the same reason I’ve heard echoed by a number of others over my 15 years here. I was totally committed to community as both a concept and an actual living choice, and yet the community I was in at the time was not very focused on the big picture, movement-level stuff. FIC was the only game in town for those of us who recognized the value of many different forms of community. I’ve appreciated having an umbrella group that plays with everyone– from cohousing and other more mainstream community models to radical ecovillages and communes that question some of the fundamentals of American culture and models of success. Having a group that is a container for those different parts of the movement to cross-fertilize each other has been incredibly valuable to me as a community thinker. 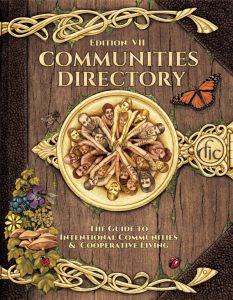 I’ve stayed involved for other reasons. Barely a week goes by when I don’t find myself recommending the Communities Directory to someone. If the Directory disappeared, thousands of people every year would be left without a vital resource for their own life journeys. I stay involved in part because, while it might not be sexy to keep something as bedrock as a directory alive, we have to do it. My service to the world is often in very public ways these days, and it is essential to my integrity to also do my part of the behind the scenes, slow and steady work that simply keeps the movement alive.

And then there’s the people. I’ve met some of my dearest friends through this organization. It attracts people who both share my geeky adoration of the movement and are also cutting edge thinkers in their own arenas, and those are the humans I most enjoy having out with. As a person with a life-long learning commitment, FIC gatherings (whether virtual or live) are constant food for me. My work is better and my heart is lighter because of my involvement with FIC.

I expect to be here for a good many more years. As I look into the future, community and cooperative culture look to me to be critical pathways for humanity. And FIC remains one of the strongest players in holding space for a cooperative transition. My steadfast involvement with this group isn’t about loyalty, it’s about recognizing my own commitment to service and belief in the human capacity for collective good reflected in a whole organization.