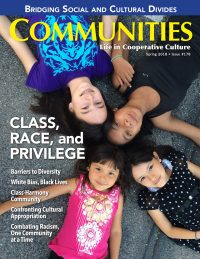 The Spring 2018 edition of Communities, focused on “Class, Race, and Privilege,” is now available by donation for digital download.

We are experimenting with a new donation-based model for supporting the digital version of the magazine, in hopes that it will greatly expand distribution and readership. Please let others know about this offering, whether through word of mouth, in blogs, in social media, or in any other venue through which you reach people who might benefit from reading Communities.

We believe this issue has relevance far beyond the world of intentional communities, which serve as microcosms for dealing with these core social concerns.

The issue looks unflinchingly at a major “elephant in the room”—the relative lack of racial and class diversity in most ICs, at least in North America—while suggesting ways of recognizing, understanding, and addressing it. Authors share stories of obstacles they’ve encountered (from both sides of the privilege equation) and positive steps they and their groups have taken to move toward greater inclusivity and equity. They also reflect honestly on the deep-rootedness of unconscious racism, of social and cultural barriers, of problems of power, privilege, classism, “white fragility,” and more.

You can download the digital version or order the print version here. 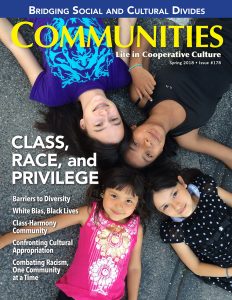 Beauty and Brokenness: Digesting Grief into Gratitude for Justice By Ridhi D’Cruz

A child of the Indian middle class immerses herself in the grassroots sustainability movement in Portland, Oregon and shares lessons learned on her journey.

The co-organizer of the People of Color Sustainable Housing Network shares strategies for deepening your community’s work on issues of race, class, and privilege.

On “Waiting” for People of Color By Michael Brickler

On the land where his grandfather was born a slave, the founder of a nascent intentional community reflects on the challenges of attracting people of color, and the project’s next steps.

Bonded by a shared mission, indigenous water protectors and their white allies find a safe space for giving and receiving honest feedback about white privilege and unconscious acts of racism.

Barriers to Diversity in Community By Crystal Farmer

Growing Inclusivity in Cohousing: Stories and Strategies By Rosemary Linares

Familiar with both privilege and marginalization, a queer Latina cohouser shares experiences and perspectives on confronting racial and ethnic homogeneity.

Bridging Social and Cultural Divides in Cohousing By Alan O’Hashi

A Japanese-American Baby Boomer reflects on how cohousing can confront privilege and prejudice, instill cultural competency, and increase diversity in its population.

Members of Sunward Cohousing recognize and attempt to transform their community’s differential treatment of white-skinned and dark-skinned neighborhood children.

A cohousing project’s budget can help address class and classism—but the community also needs to articulate and explore its culture’s underlying or hidden rules.

I’m Not a Racist, But Racism Is In Me—and in My Community By Joe Cole

Predominantly white communities are going to stay that way until they acknowledge and address racism. Here is some guidance for doing that.

Can We Have Communities without Gentrification? Perspectives from the Ecovillagers Alliance By Eve Bratman, Brandy Brooks, Taylor Mercedes, Josh Jancourtz, and Joel Rothschild

The first step to recovery is admitting that our problem is systemic, a product of colonialism. The next step is changing that system.

Conversations on Class at Dancing Rabbit Ecovillage By Sasha Adkins

Are ecovillages inherently elitist? Members of one share their thoughts and questions.

Class, Race, and Privilege in Intentional Community By Kara Huntermoon

A co-owner of Heart-Culture Farm Community explores ways to use her privilege to help create a society where people are truly equal.

Why Diversity Is Good for Intentional Community By Kara Huntermoon

A diverse community gives us better opportunities to challenge systems of oppression that operate within ourselves, in our circles of relationship, and throughout the larger world.

Combating Racism, One Community at a Time By Jenny Truax

Catholic Worker communities throughout the Midwest examine themselves, make changes, and reach out in an effort to overcome the insidious influences of white supremacy.

It’s Not Just the Curtain: Crossing the Class Divide at the Bloomington Catholic Worker By Laura Lasuertmer

Distinctions and boundaries between community members and their homeless guests can be problematic sometimes, but they are also what allow the sharing and caring to continue.

Grief and Re-Membering: The Spirituality of Confronting Privilege, Entitlement, and Cultural Appropriation By Christopher Bowers

We are tasked with fixing the human quilt by tenderly sewing the historical rips made by violence, patriarchy, and white supremacy.

At The Farm, the hippie culture’s voluntary step away from privilege and wealth shaped not only its demographics but also its mission to lift up the less privileged.

Class-Harmony Community By A. Allen Butcher

Most types of intentional community are difficult for working class people with children to join—except for this one.

A Network of Ventures for Community Resilience By Melanie Rios

Interconnected initiatives in and around Portland, Oregon contribute to a web of emergency resilience efforts informed by social justice, earth protection, and community-building perspectives.

Publisher’s Note Our Commitment to Social Justice By Sky Blue