Use code 30BOOKS at checkout for 30% off books about intentional community living! Now through the weekend—SHOP BOOKS!

An Abundance of Dads 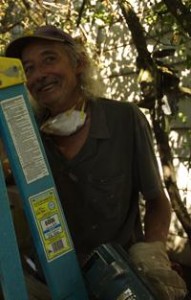 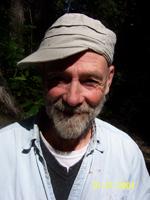 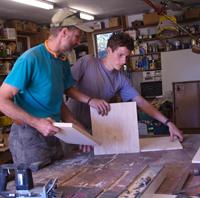 I have many dads. Not because my mom had lots of partners, but because I was raised in intentional communities where men were available to me as role models and friends. After my parents split up when I was 11, I could have become one of those numerous kids in this country without any dad present in their lives, but what actually happened is that I went from having one dad to several. This story is about four men who have influenced my life.

I was born at home in an intentional community called “The Community” in Arlington, Virginia. I’ve seen a video of this event, and there must have been 20 people present at my original birthday party, including my biological dad, Michael Rios. Before I was born, Michael and other folks at The Community started the first hotline for battered women in this country, and then started providing foster care to court-referred teenagers. So I was raised with an open door for all kinds of people. You never knew who’d be at dinner. One woman came to dinner for the first time after calling the community hotline to ask how far west she could get on 50 dollars. My dad said “How about coming over and we can discuss this question?” She stayed for years, and became like a second mom to me. Michael says he learned this welcoming way of living from my grandma, who grew up in Puerto Rico. “Tere,” someone asked her, “Why don’t you lock your doors at night?” “Because someone might want to get in,” she replied.

I moved with my mom to Maitreya Ecovillage in Eugene, Oregon when I was 11. But I still stayed connected with my first dad, often calling him every day, even now that I’m 18. He’s like a walking encyclopedia, faster than the internet for answering my random questions about the world.

When I moved to Eugene, I made friends with some of the homeless people who live downtown, and wanted to sleep overnight with them on the streets. My mom wasn’t thrilled with this idea, so we compromised by inviting one of them, Dean Clark, to live at our ecovillage. Dean had a ragged exterior and a heart of gold, and he became one of my inspirations and significant influences.

When Dean and I met, he was a 55-year-old recovering heroin addict who wore dirty clothes, smelled like alcohol, and carried the stature of a bum. He first strayed onto Maitreya Ecovillage property in search of a place to reside, and someone pointed him to the local mission. But he insisted that our village was his future home, even if it meant sleeping under a tree. I found him interesting to talk to, and so I invited him to stay, and joined him as he worked in the garden and did other tasks around the ecovillage.

Dean was a good worker, accomplishing a myriad of tasks from blackberry trimming at the ecovillage to household chores for a community member in her 70s. He worked steadily despite chronic pain, addictions, post-traumatic stress disorder, and a thin, mangled body. Our house was full, so Dean camped out initially with the young folk who were visiting the ecovillage. When winter came, someone found him an RV to stay in on our street. When the city towed the RV because it was illegally parked, Rob Bolman, whom I will describe next, built him a small bedroom to live in.

Dean’s small stature probably led to his struggles with addiction, though they might also have had something to do with his mother being a Native American prostitute and his stepfather a violent abuser. In Vietnam, the Viet Cong created underground tunnels for safe travel. Because of his small size, Dean was chosen to crawl into these cramped tunnels and face the Viet Cong who awaited him there with firearms. Unlike after WW II, when veterans were met with heroic praise, Dean met only hostility and scorn upon his return.

Within a couple of years of living with us, Dean had managed to significantly reduce his dependencies on drugs and alcohol, but he was still hooked on prescription methadone. He checked himself into a clinic to get off this drug as well, and he was almost through the two-week ordeal when the hospital staff allowed him to walk outside for some fresh air. He lost his balance, hit his head on the sidewalk, fell into a coma, and died a few days later.

Dean taught me that a person’s social status and the way they are perceived often do not correlate with their integrity, intentions, and positive effect in the world. I saw how a person’s life situation can create huge struggles, and how they deserve and need support. Watching Dean’s determination to become free of addictions influenced me to not become addicted to substances in the first place. After Dean died, I became a resource for youth centers that are over-capacity, and hosted and supported children who had been neglected or abandoned by their families. I also worked on a video documentary project to convey the voices of homeless teens in Eugene by interviewing them on street corners during the day, and in warmer places such as the aisles of Wal-Mart at night. Our film aired on a local TV station, and we used it during a day-long workshop on homeless youth in Eugene.

Rob Bolman became my step-dad when my mom moved in with him. I call him “pops,” and we get together for a meal or two when I come home for vacations, even though he and my mom are no longer together. In addition to building Dean’s small house, Rob built or renovated almost all the other buildings at Maitreya Ecovillage. I worked as his apprentice rebuilding a house foundation, renovating a garage into a living space, and making wooden cutting boards for gifts. Rob taught me that a building is only sustainable if it is beautiful, for otherwise it will be treated poorly and fall apart with age. I use the skills he taught me on a work crew at college that does construction and repairs on campus.

In addition to being a well-known green builder, Rob is also an outspoken guy who is always eager to profess his understanding of the triple global crisis of peak oil, economic vulnerability, and global climate change. One small course of action Rob inspired me to take was to purchase bidet attachments and install them around our ecovillage to reduce toilet paper use. ABC TV became interested in this and other environmental practices of my family, and invited us to participate in a reality program called “Wife Swap.” Rob’s influence on my world view has affected my career goals; next year I plan to work with one of my professors to measure greenhouse gases.

Finn Po, who also lives at Maitreya Ecovillage, is another guy I’ve called “Dad,” especially when the police brought me home for violations of curfew when I was walking home from my late night job at a restaurant. Finn was usually awake long after my mom and Rob went to sleep, and he was happy to play the role of “responsible adult” to collect the wayward kid. Finn was also my mentor in learning odd skills that might come in handy some day, such as how to turn acorns into edible flour through a process of soaking, shelling, and grinding the nuts.

Finn doesn’t take himself seriously, and is often found laughing. He’s one of the few people I know who is fully aware of the world’s suffering, but who instead of being discouraged, is enchanted by any love, hope, or inspiration that surrounds him. To him, “everything is perfect.” His speech often contains sayings that make me think for a moment. For example, he says “If you’re ready to go, you’re already invited,” or “What else can go right?” Spending time with Finn showed me the value in enjoying my current situation no matter what the circumstances.

Finn makes his living as a carpenter, and he has a different philosophy of sustainable building than Rob Bolman. Rob usually builds to code, even if it means getting special-use permits, and his goal is to make buildings that are functional 100 years from now. Finn’s goal is to build using materials gathered from our culture’s waste stream. His specialty is creating small dome-shaped huts for people to live in which range from eight to 12 feet in diameter. His own dome, made from cardboard and re-used wood, cost him 18 dollars to build 10 years ago, and it’s still in good shape.

Thanks to these four men, I go through life with many sets of eyes. I have become a woodworker looking to create things of beauty and durability like Rob, using discarded materials like Finn. I have become a welcoming person like Michael who learns from folks living on the margins of society like Dean. And these are just a few of the people who influenced me. I recommend that everyone be raised with the rich set of perspectives and skills one can find in a village.

Use code 30BOOKS at checkout for 30%off books about intentional community living now through the weekend!