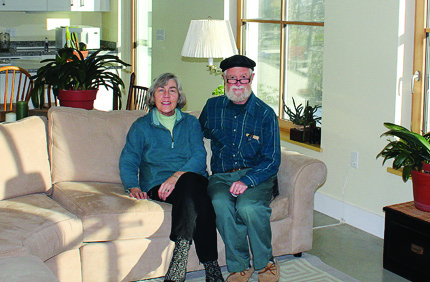 Community was important to me as a child. My mother’s parents came to the United States from Austria-Hungary. They were devout Russian Orthodox and founded and built a church around which a sizable community grew up. I spent many happy hours in that community, running free and yet knowing there were watchful eyes in most windows. All of my grandparents’ peers had suffered persecution and they knew hunger and poverty. The US was their hope and their freedom to worship was their salvation. They were very grateful for the place they had found for themselves. They tithed. Their legacy is one of great generosity and gratitude.

Generations of families lived, worked, and played in this community. I was the second generation and enjoyed all the fruits of my family’s labors. I had little idea of how hard won all this was, although my parents would remind me, when I did not want to eat something, that there were “starving people in Africa.” I sometimes have thought of this as shaming, but it was an important lesson. Waste is an issue for me, and yet my parents made sure we were wanting for nothing. My mother labored her childhood away in her father’s various industries. Her mother died when she was 13. She did not want me to suffer and she tried to protect me from her own suffering. She gave generously of herself and to her church also. She was both frugal and generous.

My father’s legacy to me was more complicated. He protected me from the horrors of war that he experienced. He wanted to make sure that I would never have to experience the heartbreak that he, as a combat physician, had endured. He talked about it not at all except for two funny stories. I never saw my father get very upset about anything. It was as if there was nothing that important to fight for in the day-to-day living of 1950s small town life.

I do not know if my father had learned to create peace in his heart or if he just wanted to avoid conflict. But I do know that he never would have allowed me to go to Vietnam. He did not have to show his cards on that one because I pulled a high number in the first draft lottery. I believe my father was a peacemaker and felt heartbroken that we were at it again.

I decided at a very young age that I wanted to create a community to live in. I believe that this idea must have been born during my time spent in my mother’s family’s community. I saw a place where everyone lived in peace, where there were no arguments and everyone loved one another. Steve, the man who came once a week to do our landscaping, was a member of the Russian Orthodox community and I used to talk to him about my vision. He would often greet me with “How is your utopia going?”

I left home for college and moved into a dorm with 550 other freshman boys (and I do mean boys). I loved it and thrived in this thrown-together community of burgeoning testosterone and newfound freedom. It is a miracle I survived it. My thirst for creating community increased and then I attended the festival of music at Woodstock and it was here that I came to truly believe that we could live together in peace. I returned to the university and fought against the war, helped shut down the university, and marched on Washington DC. A community came together in unity against the war. I moved into a men’s coop of 25 men.

And then my world fell apart when my father died. I took my broken heart home and my vision blurred. I started on the same journey that it seemed so many of my peers were on—wanting to continue living in the manner to which we had become accustomed. And so I did: a wonderful wife, two amazing stepchildren, an oceanfront home, good work, and two cars in the garage. My wife and I helped found a church, just like my grandfather.

But I was so disappointed in the first baby boomer president who I had so much hope for. Then came the second one who perpetrated war and told us all to go shopping. It seemed as though we boomers had lost our way. Where was the outcry against war? Why did we have to fight so hard to protect our environment? What was I doing living in an enormous house using 800 gallons of fuel/year for me and my wife? I felt I had lost my way in the pursuit of happiness.

Belfast Cohousing and Ecovillage has given me the opportunity to redeem myself in so many ways. Here I live in an energy efficient home that, last year, was net zero. What a good feeling to conserve in this way. I also love that I no longer need one of everything. One notice on the community website or a few phone calls gets me anything I might need in, literally, minutes. This is frugality of the highest order. I love that my trash men are eight-year-old boys who also will collect my recyclables because we develop only a small plastic grocery bag of trash per week. That they understand the difference is a joy as well.

Living here also gives me the opportunity to correct some of the legacies that were not so useful. Here I am learning to speak my truth out loud, even if it is anger or pain or fear. I am learning how to accept the many different ways people have of encountering their world, which in the case of living in community might also be mine. It is one thing to witness people from a distance and another entirely to have to make decisions with them. There is, I would venture to guess, no more challenging place for me to learn how to create peace in my heart—no more challenging place for me to create deep compassion. It is incumbent upon me here, like no other place I have lived, to take responsibility for how I create my reality.

I think many parents of baby boomers would find this way of life fascinating. I wish my parents and grandparents were around so I could show it to them. And Steve, I’ve found my utopia, it just isn’t quite as utopian as I had fantasized!

Jeffrey Mabee has lived in Belfast, Maine for 33 years and is a founding member of the UU Church of Belfast and Belfast Cohousing and Ecovillage. He is a seaman, plantsman, photographer, horologist, grandfather, kite flyer, and bubble master. He has a psychotherapy practice with his wife of 25 years. Now that he has downsized by 75 percent he spends his time trying to figure out what to do with all his stuff!

Filed Under: All Blog Posts, Communities Articles, Community Where You Are, Finding Community, Issue 166, Life in Community