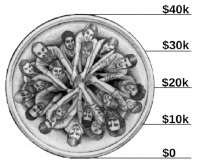 Why does this matter to me? 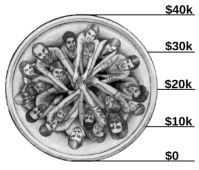 Anyone with idealistic tendencies loves the idea that a crisis is an opportunity. I certainly qualify. But as a California boy who’s spent most of his adult life in Virginia, I’ve been infected with that East Coast, get-er-done pragmatism. So while I absolutely believe the FIC is presented with a tremendous opportunity right now, the fact is we are also in financial danger. As the Executive Director of the FIC, I am the person most centrally responsible for implementing, overseeing, and coordinating strategies to address this. My goal is to direct a fundraising campaign that will bring in $40,000 in new income by January 1st. Yes, it’s stressful and overwhelming. Why would I take this on?

I’m essentially paid $10/hr for 20 hrs/week. I like to think that I am one of the lowest paid Executive Directors in the US. I’m able to accept low pay because I live at Twin Oaks Community, where $10/hr is enough to turn my salary into the labor credits I owe this income-sharing community. Twin Oaks, through income-sharing and intensive resource sharing, is able to operate on around $6000 per member per year, and $10/hr is actually better than our two main businesses make. It works well for both Twin Oaks and the FIC. But, in other words, I don’t even get the money.

So, why have I taken this on? Well, if the FIC folded, I’d be out of a job. Except, since I live at Twin Oaks, I don’t need a job, and, really, Twin Oaks doesn’t actually need my FIC income, and would arguably benefit more if I did my entire 42 hrs a week in the community anyway. But I feel supported by Twin Oaks in the work I do for the FIC. I get to make a living working for the communities movement, which is a rare and special opportunity. It’s an opportunity I would like others to have. Twin Oaks believes in communities movement, and I do too. 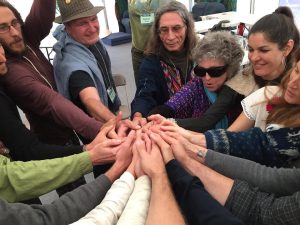 When I was 18, there were two paths I was interested in, intentional communities, and environmental activism, particularly with Earth First! Not that it’s an either/or thing, but ultimately I decided that I wanted to focus more on creating positive solutions, though I have always been a believer in direct-action as a necessary tactic for disrupting the systems of oppression and exploitation for which we are trying to create alternatives. I want to help change culture and figure out how society can live together peacefully and sustainably. I was a new member at Twin Oaks, I heard a long-term member say, “we’re learning how to share finite resources equitably and work things out without violence. Isn’t that what humanity needs to learn right now?”

I believe that what has been learned, and what is being learned in intentional communities all around the world is applicable and relevant to society as a whole. It’s not the answer, but it’s a piece of the answer. I was raised with environmentalism, feminism, and, though I didn’t really realize it till I moved to Twin Oaks, egalitarianism. I was raised at the tail end of the cold war, when nuclear holocaust was still a prospect. I was raised to see myself as a global citizen with a responsibility to help make the world a better place for everyone, and working to develop and promote intentional communities is a part of how I can do my part.

I think humanity is in grave danger. As comedian George Carlin once said, “Save the planet? The planet’s going to be just fine. It’s the human’s who are fucked.” I want live a long, happy, healthy life. I want my son to. I want everyone to have that opportunity. I think humanity is working on making that less and less possible every day. I feel sad, scared, and angry at what I see happening in the world.

But I also see so much love, joy, and beauty in the world too. Intentional communities are places were I’ve seen a lot of that, experienced it, had my life changed by it, and seen so many others have their lives changed. Again, it’s not the only place I see this, or the place. It’s a place, among many, where people are trying to cultivate something different for themselves, their lives, and the world.

At it’s core, I believe this “something different” has to do with remembering that we have a choice. There’s so much privilege wrapped up around the concept of choice. Being able to have a choice about many aspects of daily life is a privilege most people in the world don’t have. I am immensely privileged to have been raised to believe I had a choice about how I live my life, to have been raised with enough safety and security to feel confident to make my own choices, and to be of the demographics most privileged by our society. But I don’t think choice should be a privilege, I think it should be a right, and those who have that privilege should use their privilege to help make it a right. Intentional communities, at their core, are about asserting that we have a choice, and that everyone, within bounds of ecological sustainability, and in cooperation with others, should have equal access to the resources and decision-making affecting their daily lives.

And at it’s core, I believe this “something different” is also about compassion. It’s about recognizing that the choices we make affect each other, wanting for others the same love, joy, and beauty we want for ourselves, and recognizing that it’s only available if it’s available for everyone.

You can call it enlightened self-interest. I do the work I do because I want to be healthy and happy, and I see my health and happiness as reliant on the happiness of others. I believe intentional communities are helping to define and demonstrate the path humanity can take to create a truly peaceful, sustainable, and just society, that works for everyone, for all species of life, no exceptions. This is why I do this work. 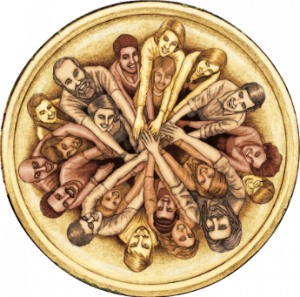 If you see the opportunity we’re presented with, please contribute to our Fall Fundraiser. The intentional communities movement is poised to make an even bigger difference in the world than it already does, and I want us doing everything we can to support that.

I also know that there are lots of other organizations and movements out there that need support. You’re probably giving to others as well, which is fantastic. I want you supporting worker co-ops and Transition Towns, groups working on the Syrian refugee crisis and war relief, the people fighting for indigenous rights and the rights of the planet at Standing Rock and elsewhere, groups that are led by people of color working for racial, social, and economic justice. And I hope you’ll decided to support the FIC as well. Intentional communities have a piece of the solution, and I’m excited to see so many people in so many movements bringing the pieces together.

3 Replies to “Why does this matter to me?”

I like Jack Stack’s approach to financial management by opening the books for everyone to keep score with using the financial statements . Your graph for your report could be divided up into a six-piece pie detailing your primary areas of focus that involve 1) Ideas, 2) People, & 3) Things in its overview.

Next after very little scrutiny, I incline towards an outfit like Patreon to touch base with donors via a YouTube Intentional Community VLOG and ic.org. It seems Patreon’s advantage is in its transparency. Some artists and creators do not need the extra income; some do.

I would also like to see an effort made by the Fellowship to outline its organizational structure with faces, names, and the communities with whom each are associated. So that if a Thing was needed it could be provided in lieu of its symbolized value aka as ‘$$$’. The local university’s surplus auction happened to have a farm tractor ready to go out on its last auction. The local U happens to also be an outlet for regional school districts to unload their unwanted materials such as lockable steel file cabinets-some fire proof, lab tables, electronic measuring equipment, etc.

Last, I have been wondering if the Fellowship has a foundation of its own. The Yankee Doodle Foundation would be a good name for non-conformity, because it sublimates post-civil war stereotypes implanted by a biased media bent on engineering our expectations for controlled profits. The core mindset for it would nearly be egalitarian, but without the subtle, self-indulgent lies described by Ellsworth Baker MD in his . The foundation could then fund more fellowships, trusts, syndicates, and a war chest for administering the Uniform Commercial Code, real-estate acquisition, spying (networking), and social involvement in cooperation with homeless & labor coalitions ( free on-line).

B. F. Earl
State of Washington

Three book names for reference did not post in the above comment.
1) Jack Stack’s A Stake in the Outcome.
2) Ellsworth Baker’s Man in the Trap.
3) The Law School Bible which may be read on its Web site for free.
Evidently European style quote marks using the greater-than and lesser-than symbols do not work.
So be the way.