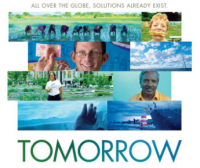 French Documentary “Tomorrow” Explores Transition Projects All Over the World

A new documentary made by a French filmmaking duo takes a look at transition projects in Europe and all over the world. Cyril Dion and Melanie Laurent set out to find practical solutions to the problems facing our planet.

The result, called Tomorrow, tells the story of “pioneers who are re-inventing agriculture, energy, economy, democracy and education” in 10 different countries, from Iceland to India.

Over 1.5 million people have seen the film in France, and it’s beginning a community-led roll-out in other regions. The Transition Network is asking community groups in the U.K. to host local screenings in order to boost the film’s impact and profile.

Organizers can download a PDF guide to making the most of a screening, which includes ideas to keep viewers engaged long after the movie is over.

The project was funded by 10,000+ backers on the crowdfunding site KissKissBankBank, raising over €444,000 in all.

Some of the transition projects featured include:

“All over the globe, solutions already exist,” reports the films tagline. Check out the trailer below and look out for a screening near you to see some of these solutions firsthand.