So many of the community structures that we write about here at FIC – such as community land trusts – have a long, but often overlooked, history. That’s why it’s important for writers, filmmakers, and historians to document stories of intentional communities over time.

A new documentary, Arc of Justice, does just that. Made by Helen S. Cohen and Mark Lipman of Open Studio Productions,

“Arc of Justice traces the remarkable journey of New Communities, the first community land trust that was created in rural Georgia as leaders of the Civil Rights Movement searched for innovative ways to create economic opportunities for African Americans.”

By the late 1960s, the Civil Rights Act and the Voting Rights Act had been passed, but many African-Americans in the South found themselves struggling against predatory lending practices, the industrialization of agriculture, and opposition from white landowners who resented their growing voting power. As Shirley Sherrod says in the trailer:

Congressman John Lewis, who was active in the Civil Rights Movement alongside Martin Luther King, Jr., says that “there was this growing feeling on the part of so many individuals and leaders within the movement that if you had your own piece of land, you could do things, you wouldn’t be dependent on others.”

A small group of activists, including community organizer Charles Sherrod and real estate broker Slater King (both African-Americans), and white homebuilder Bob Swann, began exploring ways ways to make land ownership for black farmers a reality. With support from the National Sharecroppers Fund, several of them traveled to Israel to study kibbutz life. According to Greenfordable:

“These eight activists returned to the United States after a month in Israel, convinced that something like a network of agricultural cooperatives, developed on lands leased from a community-based nonprofit, might be a powerful model for the rural South.” 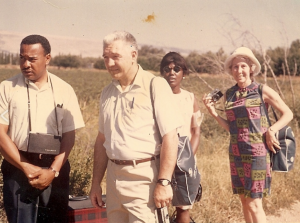 In 1970, the group purchased a plot of land in Georgia under the name New Communities, Inc. In total, NCI acquired “3,000 acres of farmland and over 2000 acres of woodland – at the time, the largest tract of land owned by African Americans in the United States.” It was also the first community land trust (CLT) – a legal structure that has served as a model for countless other communities.

NCI spent the next decade growing crops and paying off the $1,000,000 cost of the land. Although it had plans to build a residential community on the property, financial support from the Office of Economic Opportunity never arrived, due to the interference of Georgia’s governor, a segregationist. After years of drought impacted the community’s finances, the land was foreclosed on in 1985.

But the story wasn’t over. A decade later, following a class action lawsuit brought by black farmers against the USDA, NCI received a $12 million settlement over the discriminatory lending that contributed to its foreclosure. The group used that money to purchase a new plot of land, Cypress Pond Plantation, near Albany, GA, in 2011:

“NCI is now growing pecans and using the antebellum mansion on the property as a retreat and training center, still committed to its original mission of promoting racial justice and economic development.”

Arc of Justice, which runs 22 minutes, recently premiered in San Francisco and is available on DVD or streaming. You can also learn more about New Communities, Inc., at Roots and Branches, a website that documents the history of community land trusts.

Check out the trailer below and look out for a screening near you: