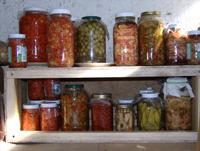 The Church of Fermentation

It seems that for a number of people around here (in northeast Missouri’s tri-communities), food choices and dietary preference have filled a similar role as belonging to an organized religion. People gather around food, grouping themselves in eating co-ops that share common food values. I’ve also seen quite a few people defend their personal dietary dogma just as fervently as a fundamentalist Christian might defend their church’s views. And there are many sects of diet preferences: gluten-free, low-carb, raw food, 100-mile diet, vegan no-honey, vegan yes-honey, the list goes on. My personal food life cycle has gone something like this: omni-vegetarian-vegan-vegetarian-omni. I’m not usually one to give sermons about dietary preference, but I feel like I’ve seen the light, I’ve been saved, born again, whatever cliché you want to use, and I’m going to preach to you about lactic-acid fermentation.

My new-found love relationship with lactic-acid fermentation began this past summer with my desire to preserve batches of garden produce in the simplest way possible. We do not have a refrigerator-freezer and I was not thrilled with the idea of long hours of canning produce over a hot wood fire in the middle of summer. Encouraged by my new neighbor Valerie, who let me taste some of her okra and cucumber fermented pickles, I decided to look into vegetable ferments, a topic that had previously seemed complex and clouded in mystery. I purchased the book Wild Fermentation (pub. 2002), and inspired by the wisdom of Sandor Ellix Katz, I began my experimentations.

I started with a somewhat traditional pickle: dilly beans, but these were fermented and alive rather than sealed in jars with vinegar and sterilized in a boiling water bath like those I’d made in years past. Then, after reading recipe after recipe in Wild Fermentation, I came to the realization that basically, with the magic addition of sea salt, I could potentially ferment just about anything. And what’s more, not only was this process actually fun and easy, the resulting products are alive and teeming with beneficial microorganisms. According to all that I’ve read, fermented foods enhance digestion and gut health, boost the immune system, and are higher in vitamins and enzymes than the original raw veggies. Om Shanti.

Now, it’s true that things can go awry with vegetable ferments, but as long as there’s enough salt and it’s kept out of contact with air, it’s nearly a guaranteed success. I have a pretty sensitive palate and that first batch of dilly beans I made had a distinct undertone of old socks, but no one else seemed to notice and I got nothing but compliments. I began branching out and found a new love of eggplant pickles—absolutely divine, and okra pickles—slimy yet satisfying. My partner made the comment, “these days you go around saying ‘this tastes good…I wonder what it would taste like rotten.’” Which is actually not true, since the addition of salt means that food ferments rather than rots. There’s a distinction. The complex flavors of vegetable ferments are simply delightful to me—like the enjoyment of a fine wine or an aged cheese, two examples of fermented products that are more socially acceptable in this day and age.

I believe in the idea that we get a substantial amount of prana—life force energy—from the foods we eat. Prana is greatest in food that is prepared in a loving environment, naturally brightly colored, nutrient-dense, and derived from plants and animals that were healthy and were recently alive. The farther the food is from its source, and the more heavily it is processed, the less prana it will contain. When I eat my fermented culinary creations I am ingesting live microorganisms who are predigesting my raw, organically grown produce, and I can feel the wonderful pranic difference in comparison with other foods that I eat.

Lactic-acid fermentation is a win-win in that the results are tasty and they can be prepared with little effort. It is also a way to turn marginal food into something worth raving about. I like that it is a form of food preservation that can be adapted to any quantity you have on hand. You can ferment veggies in a pint jar or in a five-gallon bucket. It is easy to make small batches and fun to get help from kids or friends for preparing larger quantities. The finished products can be stored in a refrigerator for many months and keep the fresh flavor, or they can be stored in a cool spot around the house and flavors will continue to evolve. Preindustrial societies typically ate cultured and fermented foods with nearly every meal. Fermentation enabled them to safely store foods for months or even years without refrigeration. Fermented foods are a great addition to any meal, and I love bringing them to potlucks and sharing them with my friends. Fermentation enhances the flavor and nutritive value of foods, and that’s something I think is worth preaching about.

Tips for a good vegetable fermentation experience:
● Ferments with more salt will develop slower and will keep longer. If you are on a low-salt diet you can use less salt and then refrigerate your creations and consume them relatively soon after fermentation occurs.
● To avoid spoilage, keep ferments out of contact with air. This can be done by placing a weight on top to submerge veggies under brine (salt water solution). Another way is to place an air-lock lid on the jar. As fermentation occurs, air will be forced out of the jar but won’t be allowed back in.
● If some funk does grow at the top of your creation, just skim off the top layer and eat what’s below. Rest assured that the part that was not in contact with air should be safe to eat.
● Check your ferments relatively often for the first few weeks that fermentation is happening. Sometimes excess liquid may bubble out (put the container on a plate to catch spills), or if a jar lid is on too tight, pressure can build up and should be released periodically.
● Be creative and have fun!