Notes from the Editor: Won’t You Be My Neighbor? 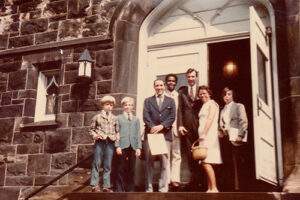 The Communities editor is invariably involved in networking—connecting readers to authors, connecting community-seekers, communitarians, communities, and cooperative activists and projects to one another, connecting our own nonprofit with other people and projects who are allied with our work. Magazines like this one, focused on Life in Cooperative Culture, are inherently networking tools, bringing disparate individuals and groups together through the magic of the written word and reproduced image. Fortunately, the editor does not need to be comfortable at parties, power lunches, golf courses, social media sites, or networking gatherings to contribute to this work. I (in this case) can be exactly who I am (that is, someone not generally drawn to any of those things, except the latter when they involve intentional community).

As mentioned here before, I first read Communities in my high school library, back when Paul Freundlich (whose latest article appears on page 65) was editing it. My high school years are also notable for the fact that by the end of them I had sworn off television completely, believing it to be a distraction and an escape. I felt it added no meaning or value to my life, and I wanted to pursue real life (such as that I’d read about in Communities) instead. With rare exceptions (usually involving family visits or YouTube clips), I have never deliberately watched television since.

Why is this important? It might not be, but for the purposes of this Editor’s Note it is. For despite the connection between those two things—discovering the world of community and disavowing the world of television—it’s not true that no television show ever had any lasting meaning to me.

One show did. Unlike the others, it found an emotional resonance and affected me in ways otherwise restricted to such things as real life, good books, and music. And perhaps not surprisingly, it was created by someone who (in the words of his eldest son) hated television. Yet he also had a dream of the entire country coming together as “one community” through that medium.

My parents bought their first TV specifically so my brother and I could watch the new show Mister Rogers’ Neighborhood, which debuted on national television when I was six years old. Fred Rogers quickly became the most important adult in my life besides my own parents and other family members; he visited our living room every weekday evening before dinner, and took us around his home, his neigbhborhood, and the Land of Make-Believe. As has been true for millions of young viewers, he seemed to speak directly to me. And his messages, I see in retrospect, were all about the understandings and skills that lead us to be “good neighbors,” good members of our communities—simply by being (and accepting and loving) our whole selves, which makes it natural and easy to accept and love others in the same way. The difficulty of attempting to capture those insights simply via the written word is the flip side of the power that the medium of television—which can reveal so many aspects of a person’s being simultaneously, if used skillfully—brought to those same insights, when in the hands of Fred Rogers.

Mister Rogers’ Neighborhood recently re-emerged into national consciousness through the documentary Won’t You Be My Neighbor? As of this writing, I’ve watched it four times, with four different friends, and I will not soon tire of watching it.

My family’s connection with Mr. Rogers became more than just through the television. One day my father, the organist and choirmaster at a local church, came home from work and asked us to guess who’d just auditioned, successfully, to be his new tenor soloist. We couldn’t guess. It was Officer Clemmons (François Clemmons off-screen). François, who lived a commuter train ride away in New York City, became a frequent visitor to our house, and a regular overnight guest especially before major choir performances, and my mother (a keyboardist herself) accompanied him in children’s concerts he gave of Mr. Rogers’ music around the Northeast. After a few years of this, my parents, my brother, and I took a trip to western Pennsylvania to help my grandmother move up to our town.

François, in Pittsburgh for show filming at the time, suggested we attend a Sunday morning church service with him—we might appreciate the preacher. It turned out to be Fred Rogers, whom we met after the service, and who immediately invited us all to lunch. He was the same in person as on the screen—gentle, kind, genuinely caring, imaginative, funny. In the restaurant, the waitpeople continuously topped off my water glass after nearly every sip. Finally, I asked, “Why do they keep filling my water glass?” Mr. Rogers looked me directly in the eyes from the other end of the table and said “You know, I’ve often wondered that myself.”

Fred Rogers’ being and his values—for him, everything comes down to “love…or the lack of love”—seem timeless. Watching Won’t You Be My Neighbor? with a close friend seems simultaneously like being in my childhood living room—being reminded that I am loved, that I love, that I am fine just the way I am, that I am special to others and that they are special to me, that the world of make-believe and imagination has lessons for everyday life as well—and reconnecting with that message in the present day, after countless messages to the contrary coming from mass culture and consumer society.

The values embodied by Mister Rogers’ Neighborhood are as applicable to our lives today as when we were children, but they are at a great disadvantage in mainstream society. Intentional communities and other cooperative efforts to establish an alternative to that society create opportunites for exploring, much more easily, the quality and pace of life that Mr. Rogers embodied and shared with his viewers and his real-life friends and neighbors too. Caring, kindness, patience, an embracing of the whole self and of feelings (of all kinds of feelings, not just “happy” feelings), facing rather than denying or escaping from challenges, self-acceptance and acceptance of others, love…all of these are the medicine that we need in the modern world, in all phases of life.

Fred Rogers was fighting an often losing battle against the direction of our society and civilization. As described articulately by him and others in the documentary, the forces of commodification, the forces that would mold both children and adults into consumers, that would dull their senses and feelings, are powerful and nearly ever-present today. Yet they can be held at bay more effectively when two or more are gathered together…and when a whole group is gathered together, real alternatives are possible.

Large portions of each of of my fellow film audiences left the theater with tears in their eyes, moved not only by the beautiful visions and realities, consistent kindness and caring offered by Mr. Rogers and his neighborhood, but likely also by grief at how far we have fallen away from the world that, person by person, interaction by interaction, Fred Rogers showed was possible, and helped make possible in our own lives. If there’s ever been a true “television neighborhood” (remember, as someone who also “hates television” for the most part, this is a somewhat radical thing for me to say), it’s been the neighborhood of all of us touched by Mr. Rogers.

However, I am not going to spend the rest of my life watching Mister Rogers reruns. I’m going to remember the gift he gave so many of us in our childhoods, through an unlikely medium that many of us subsequently rejected, and do my best to be the kind of neighbor Fred Rogers was talking about all along. And I’ll also remember another abiding message his show imparted: media matters.

That’s why, even though this magazine currently reaches only a small fraction of the audience Fred Rogers reached, I think it matters. And it’s also part of why the FIC’s other efforts at outreach and service also matter: the Directory, resources offered through Communities Bookstore, multimedia projects like Planet Community, and events and gatherings celebrating the various ways intentional communites and others seek to cultivate neighborhood. In a world with many countervailing forces, it’s up to all of us, through our relationships, our families, our communities, our networks, to reweave the fabric of a world in which neighborhood, community, imagination, life-in-all-its-imperfection, and love, often marginalized now, are at the center of everything once again.

Filed Under: All Blog Posts, Communities Articles, Community Where You Are, Issue 180, Life in Community