Don't miss the networking event all about intentional community! — Sign up to join. 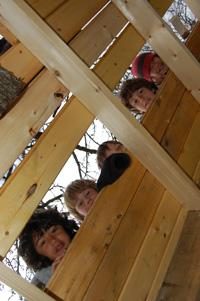 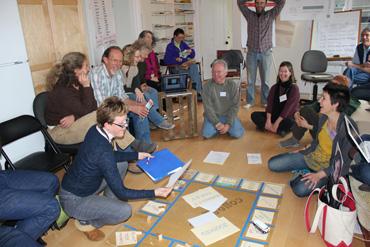 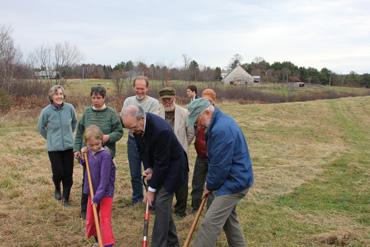 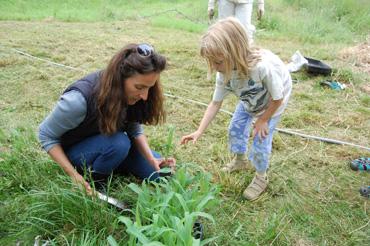 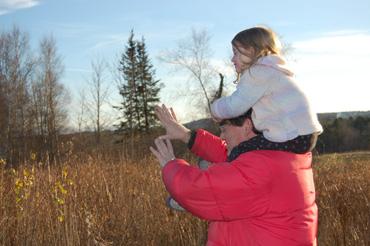 In the small coastal village of Belfast, Maine, an ecovillage is brewing. The ingredients have been steeped, following the recipe of a cohousing project and the dream of becoming an ecovillage. Years in the planning, with designs percolating and group processes filtered through, we broke ground in fall 2011. The first homes are being built as I type this. Move-in for the first residents is slated for May 2012.

Forty-two acres at the edge of town, two miles walking and biking distance to downtown, 36 households will stand. Sandwiched between horse farms, the land is open with hay fields while the Little River defines its southern border. Beautiful views of the coastal Maine hills will greet us each morning as we wake in our south-facing sun-dependent homes.

What are our dreams for becoming an ecovillage? The mission for Belfast Cohousing & Ecovillage is “to be a model environmentally sustainable, affordable, multi-generational cohousing community that is easily accessible to Belfast, includes land reserved for agricultural use and open space, and is an innovative housing option for rural Maine.” (www.mainecohousing.org)

Our mission opens many small but significant questions to be decided as we grapple with giving definition to that irascible word sustainable. What, exactly, are we trying to sustain? A way of life? The planet? An ecosystem? What will truly make us an ecovillage? So far we answer this with plans for farming, growing our own food, putting food by, shared resources, a neighborhood of the old-fashioned type where the village raises the child, living in harmony with the land, allowing there to be space for the more-than-human world…an ecological vision for sure, but one that is still only a vision and not yet real.

In the design process, we started with houses, of course. How to arrange them became clear when our decision was to go with a solar design; next came the decision for duplex/shared wall houses. (Now this pushed the psychological boundaries of middle to upper-middle class folks!) Then came a significant pivotal decision to get off petroleum (at least for our homes—we’ll deal with cars later…a much stickier issue), and thus the hiring of the local Design/Build team of GO Logic who build to German Passiv Haus design standards. (See sidebar for more information.) Given the climate in Maine, where 90 percent of the winter home-heating fuel is petroleum based, this was a radical decision. Not even gas cook stoves with those telltale propane tanks outside will exist for our homes. Nor will we have wood stoves as back up—we didn’t want to breathe each other’s smoke. For some of us, imagining a winter without a wood stove as, at the least, back-up heat for a snowstorm that takes the grid down, is akin to heresy. Thank goodness the prototype house that GO Logic built a few miles away is performing to Passiv Haus standards and we have seen the data and are assured that we will be warmed by the sun as we are cocooned within the super-insulated walls of our homes.

With a mission in place to become sustainable, affordable, and multi-generational, we have mostly failed on one account: affordability. By making the decisions we did, we have left out most of the young Maine families that reside in our area. Affordable, we came to understand, is relative. Our prices work for out of state or urban-dwelling prospective members, but are not affordable for most of the young families that already live here. High-paying jobs are not plentiful in these parts, known mostly for its beautiful scenery, recreational summer boating, and organic and conventional farming. The affordability issue also squeezes on the mission to be multi-generational. Because of the costs, we have easily attracted older, close to retirement-aged people who are trading larger homes for a small, energy-efficient home, while we have struggled to retain young families with children under the age of 12. When you look at the demographics for cohousing communities around the country you will find highly educated, progressive folks, with plenty of discretionary time on their hands, and income levels that rank in the middle to upper-middle class range—hardly the demographics for Waldo County, Maine, which is one of the poorer counties in our state. But we do have families with children and for that we are grateful.

These issues have been compounded by the timing of our project. The land was bought in July 2008, with our spirits soaring as months of planning were turning real when people plunked down money to buy the land. August, one month later, the economy collapsed, caused, in part, by a burst of the housing bubble. This project is a testament to the sustained vision held by its members in that we were able to break ground three years from that land purchase with 21 houses sold. Since ground-breaking we have sold three more. We continue to market the remaining 12 units with the goal that the project will be complete with Common House by the end of 2014. Given the bad financial climate, we were also counseled by a former cohousing developer, John Ryan, to do our own self-financing, saving all the paperwork and oversight that shaken bankers would hold us to. Though risky, it has proven to be a way forward in this devastated housing market. As each house is built, the risk becomes less and less. Our final goal is to sell the last remaining houses so that work on the Common House can commence. When the Common House is complete, the main characteristic for a cohousing community will be in place, but then the challenging task of turning all of this into an ecovillage will remain.

As you read this, the first gardens will be producing the first crop of food. The Land Use Committee is deep into its design for the use of the common land: where to put the community gardens; how much acreage to set aside for the CSA farm; how to run that farm; where will the chickens, sheep, pigs go, the soccer field and playground for the children, the campfire ring for nightly sing-a-longs? This part is not a dream; it is hard work and the task of getting 24 households (and eventually 36 households) to agree to the design is a process in and of itself. The growing skill level of managing the decision-making process of a large group of people has brought us from a traditional consensus model of decision making to moving toward the practice of sociocracy, or dynamic governance. This is both exciting and riddled with obstacles—time being one of them. Distance between members is another. Difference of opinion is always an issue, and issues of power ever present. We have finally scheduled a weekend workshop and are bringing in a renowned facilitator, John Buck, to get us started on dynamic governance.

Sociocracy comes to us from The Netherlands. A Dutch businessman proposed this method back in the ’90s as new way of running his business so every person would be respected and included and the interests of the minority as well as the majority would be heard (O’Rear and Buck, 2000). The format and ground rules offer a built-in efficiency such that a large group of people can make decisions together without getting bogged down in trying to come to a full agreement within all its membership. It is a process of consent, where the decision can be made if no one raises a reasoned or paramount objection to going forward with a proposal that has been put on the table.

We learn to trust the committees that come up with the proposals and the outcome is that we are all able to live with the decisions. The efficiency factor is most attractive to us, after four years of mostly successful but often slow and stressful consensus processes. We are excited to finally have a clear sense of at least the first 24 household members. Previous facilitation and decision-making trainings have been lost on many people who have come and gone from the project. We have spent money to train people, only to see them leave the project, including most of the founding members. With purchase-and-sales agreements in hand, we can safely move ahead with the new sociocracy training in hopes that the groundwork we are laying now, before we move in, will see us through many years of successful decision making as we collaboratively build the community we have envisioned.

We are slogging through the muck but the vision remains clear. The larger Belfast community is watching us. This is a small town after all, where the networks weave and wind themselves across every sector of the culture. We are under scrutiny. Will we truly accomplish all that we set out to do? Will we be the gold standard for what the word sustainability really means? Will we become yet another example of the growing ecovillage movement? Will we be the hippie village that most folks think we are? Or will we be a group of middle to upper-middle class people living comfortably on a nice piece of land in nice energy-efficient houses?

As Rilke so brilliantly advised, “Be patient toward all that is unsolved in your heart and try to love the questions themselves like locked rooms and like books that are written in a very foreign tongue. Do not now seek the answers, which cannot be given you because you would not be able to live them and the point is, to live everything. Live the questions now. Perhaps you will then gradually without noticing it, live along some distant day into the answer.”

Here at Belfast Cohousing & Ecovillage, we are living the questions.