Festivals and Gatherings on The Farm 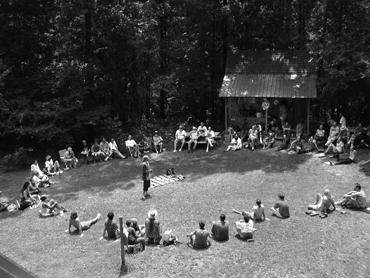 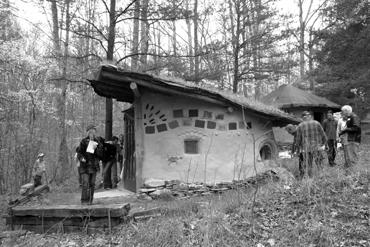 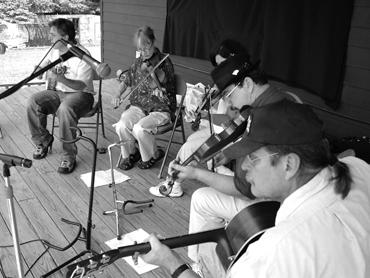 Over the decades The Farm Community in Summertown, Tennessee has played host to many different types and sizes of festivals, conferences, and gatherings. All have brought rewards and enrichment as well as challenges, especially for those engaged in the management and production of these events.

I came to The Farm in the early ’70s as a musician, a baby boomer well steeped in the roots of rock ’n’ roll. My early experience with wires and cables led me to become part of our community’s electronics crew. Our responsibilities included the setup and operation of sound equipment for The Farm’s in-house festivals before a crowd of 1000-plus residents. Our celebrations often included over a dozen bands as well as performances by dance troupes, skits, and acts of all types. Over the last 25 years, I have taken on a more active role, and work with a team of regulars who fill the roles necessary to insure all aspects of our events flow as smoothly as possible.

In the late ’80s and early ’90s, The Farm began hosting various conferences for outside groups as well as our own small festivals that were open to the public. It was no problem integrating 100 midwives, and a bit more challenging to manage 400 alternative schoolers, a crowd with kids of all ages roaming our expansive acreage of forests and fields with joyous abandon. However, as we soon discovered, groups with a focus and purpose were much easier to absorb than festival-goers intent on partying ’til dawn’s early light.

It’s All in the Logistics

No matter what size gathering or event, the organizers must determine how they will handle the logistics, beginning with feeding, then housing, and most importantly providing sanitary facilities required to satisfy the needs of a large influx of people. Through our years of communal living, The Farm Community had learned how easy it can be to spread germs and bacteria when facilities were inadequate. While bringing in port-a-johns may take care of one immediate need, they must be accompanied by proper hand washing stations to avoid spreading colds and other illnesses through the group. On our main festival grounds, we constructed several outhouses, permanent buildings complete with running water and hand washing sinks. For very large events we have brought in extra port-a-potties as needed, but this can become quite expensive, adding to overhead and cost of production. We also established a network of campsites, running water lines and installing a spigot at each location.

When it comes to providing food, potlucks can work well for small gatherings, especially when you know and trust the standards of those who will be bringing in prepared dishes. However, people attending conferences and festivals usually expect to purchase at least some of their food or have it supplied for them on site. Food vendors are an important component of the typical festival infrastructure. They provide a vital service and usually pay fees that help cover the expenses of producing an event. It is critical that the food preparation and service maintain high standards of cleanliness. Recent outbreaks of E. coli in the national news have helped to illustrate how easy it is for a restaurant or food facility to infect a large number of people. Hosts of an event can be held responsible for any outbreak or illness that may occur.

In general we prefer to manage the food service in-house for all our public events. The community’s food preparation facilities are inspected by the local health department. Our kitchen crew has decades of experience serving groups large and small, providing high quality, tasty, and nutritious vegetarian food which we know has been prepared with the proper standard of cleanliness.

The Roar of the Crowd

Every summer, The Farm plays host to a reunion of former members and their families, usually bringing in from 300 to 500 people for a celebration that lasts about five days. Much like our mini-fests of the ’70s, it is a weekend of music and dance along with festivities of all types. This event is closed to the public, but the good times to be had are somewhat legendary throughout our region. This led us to create spring and fall festivals for a number of years, events we hoped would satisfy the desire of those wishing to participate in a rock and roll communion on The Farm while generating a little cash flow into the community.

In a very real sense, the festival can be regarded as a small business. Staff must be hired to fill various positions, from collecting the money at the gate to parking, cleanup, and security. Technicians are needed to operate the sound system. A stage manager is necessary to insure the performance schedule flows smoothly. The list of jobs goes and on and on. It can all add up to a hefty budget, costs that must be met before any profit is made, in essence determining whether the event organizers and promoters receive any compensation for their time.

In some ways a festival is a little bit like farming. You start with the seed of an idea and then spend months nurturing this vision until at last you have a single weekend to harvest the fruit of all your efforts. The weather can have a direct effect on your outcome. If it should rain during your outdoor event, no one comes and all is lost. The temperature can be too hot or too cold, each affecting the whim of your fickle audience. There are likely to be other events happening at the same time, competing for the time and attention of your potential attendees.

For the first several years, we drew in a crowd of about 300, enough to barely break even, but falling far short of what we needed to make any money. Arts and craft vendors need a large crowd to make a festival worth their while, and in our case were disappointed, making them less likely to return the following year. After sending out mailings, posters, and hours and hours of volunteer time, it hardly seemed worth it.

At first we used bands that were willing to play for free. Some were pretty good, others downright embarrassing. We thought if we used more professional acts, they might help draw a larger crowd. Of course this increased our overhead, especially when we hired artists with some amount of national name recognition. As the festival grew in size and exposure, we also drew the attention of a music licensing agency who demanded a hefty fee for the performance rights of copyrighted material.

After about 10 years, the crowd had grown to 1000, still pretty small compared to major music festivals, but quite an influx into our normally quiet community. Although we promoted our events as alcohol-free, this became impossible to control, making security a larger issue. We would receive calls from frantic parents looking for their teenager who had run away for the weekend to be at our festival. Neighbors began to complain about the loud thumping bass tones rattling their windows in the wee hours of the night. We had break-ins. It all became too much.

Taken as a whole, our festivals had great vibes, great music, interesting workshops, activities for kids, cultural diversity, and a long list of other reasons why those attending loved every minute. Our vision of a small cottage industry that would generate income for the community fell far short.

A friend and I decided to scale back and we concentrated our focus on community, hosting two conferences in partnership with the Foundation for Intentional Community, a mix of educational content with a little bit of homegrown entertainment on Saturday night. Billing this new event as “The Activist Summit,” we aimed to bring political and green activists together with people from the intentional community movement. We did generate a good mix of people from both camps, and ultimately found that most of those attending were people seeking more community in their life.

Although we would have liked a bit larger crowd than the group of 125 folks who participated each year, we generated enough cash flow to cover our expenses and a little more. When hosting these types of events, one has to be prepared to offer scholarships and work trades which will help increase your numbers and the energy during your gathering, but you must keep a careful eye on the bottom line. It is easy to be generous and magnanimous before the event takes place and then find your finances coming up short when tallying up your income later. After a couple of years, I became busy with other things and moved on.

For the last several years I have been working with a small team to put on spring and fall events called The Farm Experience Weekend. The purpose is to provide an in-depth look at life in community, and it is especially valuable for those interested in moving to The Farm or any community. The weekend is a blend of workshops and entertainment, and gives those attending a chance to mix and mingle with The Farm’s many residents in a variety of ways.

I begin with a PowerPoint(R) slide show documenting our history and evolution from the largest commune in America to our financial crisis in the ’80s and how we survived Reaganomics. Participants receive a detailed overview of how the community is organized today, along with a glimpse at the work of our many different nonprofits, from international relief and development work to the creation of a separate 1400-acre nature preserve that surrounds the 1750 acres owned by the community. We also go beyond the material to examine the spiritual tenets and philosophy that are the real reasons we have been able to survive and thrive through these challenging times.

This narrowly focused gathering averages in size from 20 to 40 folks, drawing people from all across the US and around the world. The mix often includes groups of college kids who receive a special student rate. It has helped bring several new residents to our community, each one an asset in their own way.

In September of 2009 The Farm will host the 10th Bioregional Congress, an event which has brought together a group of eco-activists (recently numbering about 300) every three years since 1984. The 2005 gathering was hosted by the Earthaven community in North Carolina. Unlike most conferences which feature nationally recognized keynote speakers and experts feeding information to a largely passive audience, the Bioregional Congress aims for active participation and intense networking. Participants are directly involved in every aspect of the weeklong event, from establishing the agenda and direction of the discussion to the preparation of food. The goal is to raise the collective consciousness, rippling outward as each person returns home to share what they’ve learned. I look forward to this next step in the evolution of gatherings within our community. It should be fun and inspiring!

Gatherings and festivals fill an important niche in our social psyche. They remind us of the power and energy that happen when we share a common experience, coming together in celebration and communion, as one.

Filed Under: All Blog Posts, Communities Articles, Community Where You Are, Finding Community, Issue 142