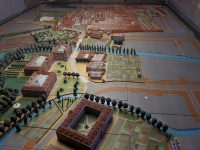 How This French Philosopher Inspired An Early Version of Cohousing

Although not as famous as some of his contemporaries, the French thinker Charles Fourier was one of the early visionaries of the intentional community movement. A utopian socialist, he proposed that society should be organized into Phalansteres, or “grand hotels,” each housing several hundred to several thousand people. At the peak of his popularity, he inspired the creation of over a dozen communes in Europe and the U.S.

Born in 1772, Fourier was an early advocate for women’s rights (and coiner of the term feminisme), as well as a defender of homosexuality. His progressive streak, however, did not extend to Jews, whom he associated with the evils of capitalism. He also predicted a future period called “Perfect Harmony,” during which the North Pole would melt and the seas become lemonade.

Eccentricities aside, the core of Fourier’s ideas caught on, and a businessman by the name of Jean-Baptiste André Godin decided to put the concept of the Phalanstere into practice. In 1846, shortly after Fourier’s death, he moved to Guise, France, and spent the next several decades building a commune that he called the Familistere. According to The New Statesman:

“Godin constructed three palatial housing buildings, each with large glass-rooved courtyards in the centre where residents could socialise and where celebrations were often held. Encircling these imposing buildings, Godin built a school, laundry rooms, a swimming pool, shops, a bar, a nursery, gardens, a gym – everything his workers and his families would need – organised around a square.”

By the 1880s, over 2,000 people lived in the community, many of them workers in Godin’s stove factory. Because the business was structured as a cooperative, they were all stakeholders in the community. In fact, it sounds a bit like an early version of cohousing:

“[E]ach worker would have an apartment for his family to live privately, but with access to shared services….The Familistère was, essentially, collective property.”

The community remained intact for almost a century, before eventually being sold off. The factory is still in operation under different owners, and part of the residency has been turned into a museum.

The Familistere was the most successful commune based on Fourier’s ideas, but it wasn’t the only one. Another Frechman, Victor Prosper Considerant, found himself exiled from the country after a failed uprising. An advocate of direct democracy, he called on fellow socialists to join him in Texas to start a new commune.

Over 200 settlers from all over Europe arrived at their destination in 1855 – a site near Dallas that they called La Réunion. But they were unprepared for the hot climate and had no real farming experience. Within a few years, many of them left, Considerant among them. But, according to Public Radio International:

“[A]bout 150 stayed, and historians credit Dallas’s early growth to the sudden arrival these people, among them architects, musicians, builders, bankers and editors. When the Civil War broke out, many of those immigrants tried hard not take a side — some even hid out in Mexico to avoid the Confederate draft. After the War, the Reconstruction government needed non-Confederates to run the town: there they were, these battered idealists.”

Although the commune itself has been largely forgotten, Dallas’s Reunion Tower serves as a reminder of the role that it played in the city’s history.

Perhaps the most famous of Fourier’s followers in America was Horace Greeley, who ran for president against Ulysses S. Grant in 1872. As the editor of the New York Tribune in the 1840s, he helped inspire other Fourierists to band together and create the North American Phalanx in Red Bank, New Jersey.

Around 20 families – over 100 people – moved into two houses on the property. Sticking closely to Fourier’s theories around division of labor, residents collectively owned and operated several businesses, including a saw-mill and blacksmith shop.

The Phalanx existed for over a decade before it disbanded. During that time, its ups and downs sound a lot like those of communities I know: regularly scheduled dances and musical performances; debates over whether or not to practice vegetarianism; a variety of different religious persuasions; and even a house currency.

It’s fascinating to look back at the intentional communities that came before us. How much do we have in common with them? What could we learn from them if their histories were more widely known? Are there any historical communities that have inspired you? Post your thoughts in the comments below.

Main image by Velvet. Interior photo by bodoklecksel. Below image in Public Domain.

Were Fourier’s predictions, more than two centuries ago, of melting polar ice-caps, and acidification of the oceans, mere ‘eccentricities’? As these are now actually occuring, the words, ‘brilliant’, ‘prescient’, and ‘visionary’, seem more appropriate.

I hate to nit-pick, but, he actually proposed organizing society into Phalanxes–not Phalansteres. He called his envisioned community–the social organization–a ‘Phalanx’. It was its architecture, the building, which he called, Phalanstere; or, in English, a ‘Phalanstery’.

Although Greeley did promote Fourierism, in his New York newspaper, the nearby North American Phalanx was neither the first, nor the most famous, of the Fourierist communities in America; rather, the Brook Farm Phalanx, in West Roxbury, Massachusetts, was; where the Fourierist movement (called, ‘Associationism’) had its newspaper, the Harbinger, published, and largely written.

There’s a ton of literature about Brook Farm; and, also about the later careers of its members. For example, I just finished reading a biography of one boy, Frank Barlow, whose nickname at Brook Farm was ‘Crazy Barlow’. He later became famous, in the Civil War, as the ‘Boy General’. Still later, as New York State’s Attorney General, he was known for fighting against political corruption. Growing up in utopia, apparently, did him no harm.

But, back to Fourier: Although his complete writings are available in French, only a small part is available in English; and, not his most controversial book, ‘The New Amorous World’, his description of romantic and sexual relations in the Phalanx. But, maybe, in today’s world of gay marriages and transgender bathroom rights, perhaps America is finally ready for his Utopian, communal-sexual vision.

His most recent re-publication was in 2011, “The Hierarchies of Cuckoldry and Bankruptcy”, in which he describes the varieties of the two kinds of ‘cheating’, in marriage and in business; or, to quote the cover, “the hypocrisies of a civilization that over-regulates sexual congress while allowing the financial sector to screw over the public”.