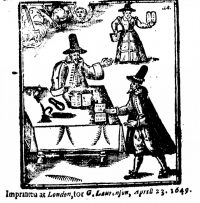 “In 1649/to St. George’s Hill/a ragged band they called the Diggers/came to show the people’s will.” So starts Leon Rosselson’s song, “The World Turned Upside Down,” which tells the story of a radical Protestant sect in Surrey, England, that became one of the earliest examples of the agrarian socialist movement.

The group formed during a tumultuous decade in England, when rival factions in Parliament disagreed on how property and political power should be allocated. The Diggers (calling themselves the “True Levellers”) released a pamphlet outlining their philosophy. According to Wikipedia, they “envisioned an ecological interrelationship between humans and nature, acknowledging the inherent connections between people and their surroundings.”

In April, as the cost of food was rising, some of the Diggers put their plans into action, planting crops on the common property of St. George’s Hill. As Rosselson tells it:

But the landowners in the area weren’t having it. They called on the army to investigate the Diggers; after finding that the group wasn’t a public danger, the army suggested that the landowners take the case to the courts. Over the next few months, the Diggers faced gang and arson attacks and lost their court case. In August, they left the Hill, with some of them relocating to a different plot of land in Surrey.

Here, the Diggers settled in for the winter, planting crops and building houses. But once again, the landowners harassed them, and by April of 1650, they left this settlement too:

“From the men of property/
The orders came/
They sent the hired men and troopers/
To wipe out the Diggers’ claim/
Tear down their cottages/
Destroy their corn/
They were dispersed/
But still the vision lingers on.”

Although the experiment lasted only a year, by this point word had spread throughout the region, with additional Digger colonies appearing in other part of England. The ideas that informed the Diggers’ movement have been carried on in countless other agrarian communes and activist groups over the years.

In the 1960s, three centuries after the original Diggers formed, a group of activists in the Haight-Ashbury district began calling themselves the San Francisco Diggers. They gave away free food, opened free stories, hosted free concerts, and worked with the San Francisco Mime Troupe to host political performances like the Death of Money Parade. One founder, Peter Berg, went on to create the Planet Drum Foundation and became a leading voice for bioregionalism in California and beyond.

Both the original Diggers and the San Francisco Diggers were active for only a year or so before disbanding. But the longevity of their vision demonstrates how much influence event a short period of activism can have.

Learn more about the Diggers at The Digger Archives and listen to this beautiful recording of Leon Rosselson’s song “The World Turned Upside Down“: