The Damanhur Community In Italy Has Its Own Currency and Constitution

The community of Damanhur in northern Italy is known for the Temples of Humankind, a 5-story series of underground chambers built by residents of the community as a spiritual gathering place. Begun in 1978, they were discovered by authorities in the 1990s, and nearly shut down. Now, they’re open to the public and have become a popular tourist attraction.

But the temples aren’t the only thing that makes Damanhur unique. For those of us interested in alternative living, Damanhur is a unique case study of a community that is doing things its own way. With its own Constitution and its own currency, this community is spreading its ideas far beyond its borders.

Officially called the Federation of Damanhur, the organization is led by democratically-elected governing bodies that oversee communities and centers around the world. Two King Guides serve as the highest-level officials for 6-month terms, while the College of Justice ensures that individual communities adhere to the Constitution’s values. 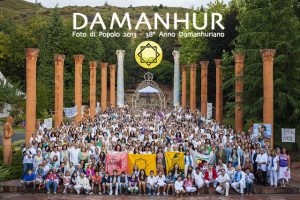 The Federation also has its own currency called the credito, which is equal in value to the Euro. Residents can use the currency for transactions within Damanhur, and visitors can exchange their money to and from Euros at the welcome center. According to the organization:

“The Credito is a return to the use of money in its original meaning: as a means to facilitate exchange, based on an agreement between those involved. The word ‘credito’ (credit) reminds us that money is a tool through which we grant trust…. It is not considered a goal in and of itself, but rather a functional tool for exchange between people who share ideals and values.”

Initially, Damanhur was founded as an income-sharing community, with all citizens contributing their income for use on common projects. After the development of the community, residents went back to maintaining personal incomes, while establishing a housing association to own and manage the properties. A cooperative entity also manages the site’s livestock and gardening projects.

Damanhur offers different tiers of citizenship, with some members choosing to live on site full-time and participate in the social and spiritual life of the community. Others live on site part-time, and take part in some of the group’s spiritual practices. Citizens can choose from several “tracks,” such as the School of Meditation or the Game of Life. 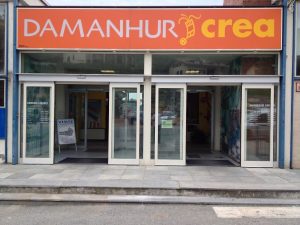 “Damanhurians have created many businesses in the fields of arts and crafts, design, construction, renewable energy, nutrition, publishing and many more…. Work is seen as a way to offer yourself to others, as a way of expressing the creative dimension and an opportunity to choose materials and processes with a low environmental impact.”

The group also runs a property called Damanhur Crea, “a ‘living laboratory’ where ideas and dreams are translated into art objects, cultural events and eco-sustainable projects. It is an example of Damanhurian sustainability: 4,000 square meters of space occupied by different services, businesses and studios, as well as common meeting areas.”

While Damanhur’s spiritual practices may seem eclectic to some, it’s fascinating to see how much the community has accomplished in such a short period of time. With a school, gardens, medical center, natural foods store, and more – not to mention the Temples of Humankind – Damanhur can serve as inspiration for those looking to try out a new way of life or start a community of their own.

Have you lived at or visited Damanhur? What was your experience there like? Post your thoughts or questions in the comments below!