Alex Daniell is a designer and builder of small residential structures. He has owned and redesigned six houses, and built several more. He has visited over 30 intentional communities, and lived for two years at the Walnut Street Co-op in Eugene. He consults as a financial advisor and belongs to the Wordos, a science fiction and fantasy writers group.

Articles by Alex Daniell include: 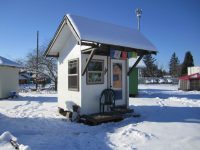 Filed Under: All Blog Posts, Communities Articles, Community Where You Are, Issue 162, Sustainability

The Meandering Paths of Arcadia

Builder and old-house renovator Alex Daniell fell in love with the charming, old-world village atmosphere of 8-year-old Arcadia Cohousing. He asks Giles Blunden, the group’s architect, how he did it.