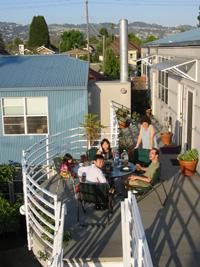 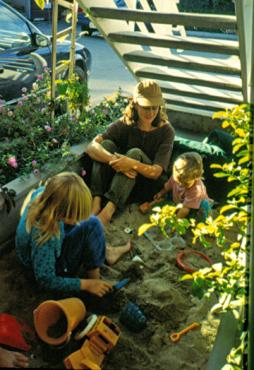 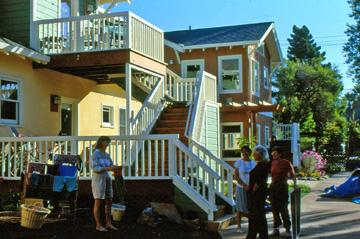 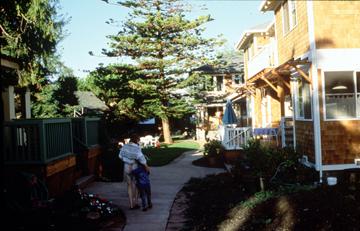 Cohousing tends to conjure up images of a happy but homogeneous group of communitarians—middle-class, highly educated, and culturally similar. This picture may feel out of reach, or even distasteful, for many people who don’t have significant financial resources, whether due to choice or circumstance.

The fact is that this picture represents only one segment of the cohousing movement—the segment that gets the most press. There are many cohousing or cohousing-inspired communities that are partially or totally populated by single parents, working-class singles or families, seniors with fixed incomes, and students. Successful homeless shelters and affordable housing complexes have been built using cohousing principles.

However, very few people have heard about these projects, which don’t fit the stereotype. Affordably priced cohousing homes are snapped up so quickly that their community’s members don’t go to great lengths to seek publicity in the way that the higher priced communities do when they’re trying to market their units. Were these low-income communities to seek media attention, the story would likely be less compelling to journalists and their predominantly middle-class audience than the more culturally relevant (to them) story of middle-class-oriented cohousing. So the stereotype remains.

Cohousing is intrinsically an affordable model: one of its main purposes, outside of a strong sense of community, is limiting resource consumption by sharing resources. The savings in energy, maintenance costs, and food outweigh the apparent up-front costs due to new construction. A survey of 200 cohousing residents showed minimum cost savings per month of $200 per household, with some even saving over $2,000. With the addition of solar systems, residents at Nevada City Cohousing are actually earning money on their electric bills instead of owing it.

In senior cohousing, proximity to friends and shared resources means that residents can live independently for a longer time instead of having to spend money on costly retirement homes, and have less need for professional caregivers. Cohousers also get more amenities for their dollar: instead of investing in an individual facility that may rarely get used, such as a workshop or guest room, for a comparable amount of money they have access to workshop, gardening, laundry, guest room, celebration and other shared space.

Costs can also be kept down through the creativity, ingenuity, and discipline of the residents and architect. A cohousing team starts by determining the price per square foot that the residents can afford, and works backward from there. The discipline to stick to this price comes from needing to ensure that all the future cohousers involved in the process will be able to afford to live there.

Cohousing members intentionally choose smaller units that are right-sized for downscaled lives; instead of spending their money on large personal houses, they channel it into shared facilities that can take advantage of economies of scale and efficient construction, and with the money saved, still have remaining funds to spend on other quality of life activities. Berkeley Cohousing was started in part by four single women, three of them mothers, whose individual cohousing home prices were $120k at a time that the average home in Berkeley was $500k. In nearby Emeryville, Doyle Street Cohousing’s prices started at only $130k. A combination of extremely efficient construction, adaptive reuse, prudent site selection, and a serious investment in up-front design kept the construction costs to $57 per square foot (in 1991).

In addition to systematic affordability for the entire community, there are multiple strategies for making individual units meet low-income cohousers’ needs. Communities with units specifically designated as affordable to low-income residents may often take advantage of government incentives like fee deferrals, density bonuses, and low-interest mortgages. Many cities actually require that a certain percent of new units be permanently affordable. To be self-reliant as a community, some cohousing groups have created their own funds to help low-income members finance homes. And of course, as cohousing grows and matures and more families are able to move into long-established cohousing communities, newcomers to cohousing won’t always be paying the cost of new construction.

Cohousing also has great potential for partnerships with public and nonprofit affordable housing developers, who have access to subsidies but still have limited budgets. In 2009, Affordable Housing Associates, a nonprofit housing developer, completed one of the first entirely affordable rental cohousing communities in the United States, Petaluma Avenue Homes. Wild Sage Cohousing in Boulder partnered with the local public housing authority, Boulder Housing Partners, to build cohousing as part of a larger redevelopment housing project. Similarly, Southside Park in Sacramento was developed in response to the local Redevelopment Agency’s request for proposals, and is a mixed-income community where 11 of the 25 units are affordable to low- and moderate-income residents, partially financed by second mortgages from the Redevelopment Agency. Other communities have partnered with Community Land Trusts, who purchase and manage long-term affordable units.

Affordable housing agencies have the potential to save money with cohousing because the residents manage themselves, and are therefore not reliant on costly management companies. Also, neighbors like cohousing—a huge benefit for affordable housing, which is often blocked by NIMBY neighbors—because it becomes a resource for the neighborhood and its residents are invested in the upkeep of the community. Unlike traditional development, neighbors actually meet the cohousers who will live next door during the development process, which can head off neighborhood opposition campaigns that would otherwise be costly to overcome.

Communities and housing developers can also apply cohousing principles to non-cohousing communities to increase their affordability (and of course their level of social capital, which provides measurable benefits to low-income families). McCamant & Durrett Architects has worked with numerous affordable housing developers to apply cohousing design and social principles to new affordable communities. Involving residents in design, development, and management; designing right-sized units offset by large, efficient common space; and creating systems for residents to share material goods and responsibilities are practices that are transferable from cohousing to help communities become more financially sustainable.

There are a number of different strategies for building affordable cohousing, but cohousing residents living in houses that cost half of what the neighboring houses cost know that there is only one reliable way to achieve affordability—jump in together and make it happen against all apparent odds. Over and over again, The Cohousing Company faces and meets the challenge of designing homes for those who come to the table, sometimes with very little cash. Like cohousing’s intentional community counterparts, we know that joining together and making a dedicated effort is how it gets done. Cohousers show great creativity, whether it’s buying cheap, nontraditional land, creating public/private partnerships, sharing a house (much more comfortable when you have access to a welcoming common house), or using less costly building materials. And of course, all cohousers save money after they move in by sharing creatively, lowering the cost of everything from dinner to lawn mowers, tools, cars, and energy, while building community with their neighbors.

6 Replies to “Achieving Affordability with Cohousing”

As a single parent who has looked at co-housing and intentional community in various areas across the US, I have yet to find living options in any community that are affordable enough for someone unless: he/she/they have a substantial down payment (meaning 50K plus); no debt whatsoever and an income which may be generated regardless of location. I would love community for myself and my daughter, shared work and sense of place, and all the other pluses that intentional communities offer, the bottom line is that right now I just can’t afford it. I bet I’m not in the minority in regard to this perplexing reality.

At Wanderer’s End, we feel that dividing the start up cost and labor makes it a sometimes only option for those needing to escape the rat race and enjoy a more relaxed stable lifestyle with thier low income. Our infrastructure affords us to only charge $200 monthly for each family. An off grid eco home on 1/4 acre of land with shares of our GMO free farm goods, make living with us even more affordable!

Unfortunately, I believe you are right – cohousing is not realistic for a number of people.

There’s nothing that inherently makes the cost of a house in a cohousing community any less expensive than for conventional homes.

I believe that it’s just not true that there are many affordable Cohousing communites. I have been trying to get into Cohousing since
I first found out about it in 1995. I’ve tried
many communities; usually one needs up front money in order to join; and I was a single parent for many years and that just made it harder. Now that I’m older and remarried; it STILL has not happened. We’ve tried together, to no avail.
I direct you to my entry in a blog on the Cohousing web pages:

Cohousing is not realistic for a number of people, and THAT is reality!!
Marsha J. Beesen

Saying that “”cohousing is intrinsically an affordable model”” is true when comparing cohousing homes to single-family homes in nearby neighborhoods. It’s rarely true when the comparables are homes in other forms of intentional community – such as ecovillages, communes, and shared households.

As the number of seniors who can no longer live on their own grows and the number of special needs adults also grows, we need to expand the model of co-housing to include supportive care. We have lived as humans for tens of thousands of years in extended families in small tribes. We need to develop low-cost rental units ($400-500/month)that mix the two populations so that they can help each other. This dramatically reduces costs and improves quality of life.
I have written a number of papers on how to do this and will help anyone who is interested develop this co-housing model for their aging parents or adults special needs children.
Phil Spottswood (spotty1948 [AT] aol.com)