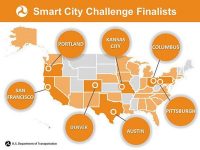 One of These 7 Finalists Will Be the First “Smart City” in the U.S.

Last year, the U.S. Department of Transportation announced its “Smart City Challenge,” a contest that will award one mid-sized city with $50 million in funding to improve its transportation networks. The USDOT hopes the selected city will become a role model for implementing safer, more energy-efficient technology.

Out of 78 entries, the USDOT has narrowed down the list to 7 cities: Austin, TX; Portland, OR; Columbus, OH; Pittsburgh, PA; Denver, CO; Kansas City, MO; and San Francisco, CA. Each city will submit a detailed proposal about how it will use the funds, and Transportation Secretary Anthony Foxx will visit each of them to meet with local leaders.

So far, the proposals have been praised for their attempts to improve traffic safety and reduce emissions — partly by supporting electric vehicle technology and improving signal detection at intersections.

Columbus, OH, for example, would “work to deploy autonomous vehicles for a pilot project connecting citizens with public transit” and would “develop a smart phone application giving truck and freight drivers access to real-time traffic information and routing.”

Portland’s plan includes technology that would detect when a bicycle or a truck is approaching an intersection, and adjust traffic light timing in order to prevent collisions. BikePortland says the plan would “make it easier to combine services like bike sharing, TriMet, Lyft and so on into a single system of multimodal mobility.”

In Pittsburgh, “Carnegie Mellon University has been working on linking vehicle sensors to traffic signals to improve traffic flow; the University of Pittsburgh and DQE are developing [an electricity] microgrid for self-sustaining neighborhoods; and Pittsburgh Parks Conservancy is working [on] … reducing chronic flooding in the neighborhoods.” The plan would help integrate each of these projects.

“We’re looking for a city that could inspire the rest of the nation,” says Spencer Reeder, who works for Vulcan, Inc., one of the companies funding the Challenge.

The winning city will be announced in June.

Do you live in any of the finalist cities? What kinds of transportation technology would you like to see in your region? Check out the video below to learn more: