Millennials Are Embracing Cohousing – Of A Different Kind

It may have been only a matter of time before the millennial generation turned its attention to cohousing. As car and home ownership among young people has declined, and as the nuclear family is no longer the go-to living arrangement, it makes sense that college grads would look for ways share resources and living spaces well into adulthood.

But these aren’t your traditional co-operative communities. One startup, called WeLive, offers a cohousing model that could be best described as a high-end dorm:

“There’s a queen-size bed partly hidden by a built-in canopy, tall cabinets lining most of the walls, and a small kitchen area with a full-sized refrigerator, stovetop, and microwave… Down the hall is a state-of-the-art communal kitchen, a laundry room that doubles as a game room with ping-pong tables, and a small screening room, filled with couches.” 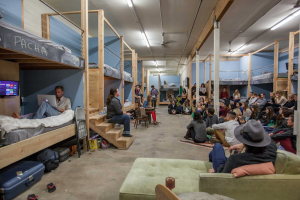 “’We built the pods facing each other so the community polices itself,’ said [co-founder Elvina] Beck….Beck is probably never alone, as she lives in the pod with 23 ever-changing roommates, 84 percent of visitors are international. The locations have 92 percent occupancy, a 19 percent return rate and over 4,000 members who have stayed with them over the past four years.”

Another company, Roam Co-Living, calls itself the “first global co-living subscription” and allows remote workers to drop in and out of coliving spaces in Miami and Indonesia for $1600 per month. In Israel, young entrepreneurs are reinventing the kibbutz, turning communal farms into startup incubators:

A “73-year-old kibbutz in the northern Negev Desert has since given birth to four fledgling Internet ventures that it owns a stake in, and is sizing up applicants for a new class of entrepreneur teams that will eventually move into the old chicken hatchery…. The four ventures that have now flown the coop, so to speak, include a wedding planning phone app and a website that’s an online platform for sharing indie music.”

In China, millennials are drawn to co-housing models like Wowqu and You+, which encourage social activity among residents. Tenants are pre-screened and selected by housing managers, who say the arrangement helps alleviate the loneliness many young people felt growing up in single-child families.

But not all of the responses have been positive. One common criticism is that these models cater to well-off college grads who can afford to pay for them – without having to take part in the collective decision-making or chore rotations common in egalitarian cohousing. And, they contribute to the commodification of the coliving concept.

Others say these attempts to create community feel forced and pre-fabricated. At Gizmodo, Sophie Kleeman writes:

“The intent of spaces like WeLive, it seems, isn’t to provide affordable shared housing—it’s to create a sense of “community” and then charge exorbitant amounts of money for it. But there are plenty of ways to create community—joining a local food co-op, a book group at the library, or, you know, talking to your goddamn neighbors—without having to move into an overpriced college dorm to do it. And even then, there’s no guarantee tenants will get what they signed up for, because individual bodies create community, not fancy cookware and well-stocked beer fridges.”

What do you think of these concepts? Would you recommend them to your child or grandchild as an entry-way into communal living? Are they a way for the cohousing model to grow on a larger scale? Leave your thoughts in the comments below!