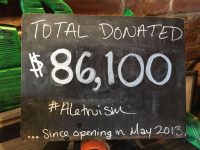 “Have a pint – change the world,” is the motto of the Oregon Public House, a co-operatively owned, non-profit bar in Portland, OR. According to co-founder Ryan Saari, the city has no shortage of non-profit charities, but these organizations expend a large part of their energy on fundraising.

The Oregon Public House was created as a way to fundraise for them:

“When customers purchase their food and/or beverage they have a chance to vote for how our donation should be given from a list of local charities. We’ve simply positioned ourselves to be the ‘fundraising department’ for these charitable organizations, by providing the community with great food and great beer in a warm, inviting environment.”

The bar is managed by a board of directors (all volunteers) and run by paid kitchen staff. All profits after operating expenses are donated to one of several charitable partners, which have included environmental, children’s, and women’s organizations. According to its website, the bar raised $25,000 in its first year:

“This ground-breaking model for business is literally the first of its kind and we believe this could begin a new wave of business and mission that has the possibility of changing the way we work, spend, and care for our communities.”

Check out this TEDx talk by Ryan Saari, in which he shares the challenges of opening the co-op, including the initial round of fundraising, and what the IRS thought of their plan:

The Oregon Public House may be one-of-a-kind, but it isn’t the only co-operative bar in the country. The Riverwest Public House in Milwaukee, Wisconsin, has a similar model. Rather than supporting a range of charities, it donates all of its profits to the Riverwest Cooperative Alliance. 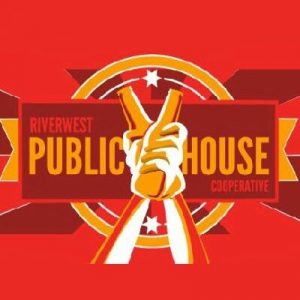 Opened in 2010, the Public House is a spin-off of the Riverwest Co-op, a natural foods grocery store and cafe. The bar is owned co-operatively, with memberships costing $40/year or $200/life. Members get discounts on drinks, a vote at the general assembly, a share of ownership, and other perks.

The bar aims to be not just a drinking establishment, but a hub for community activities, and offers a rotating series of events, ranging from Theatre of the Oppressed to Sex Ed for Adults. Plus, anyone living within 50 meters of the bar is automatically considered a Neighbor Member and eligible to vote on the board.

From the Black Star in Austin, TX, to the Old Crown and the Ivy House in Britain, the number of co-op pubs is growing. Want to help start a co-operatively owned bar near you? If you think your neighborhood would be right for one, this article offers advice on “turning your local pub into a co-op.”

For more info, check out the TEDx talk above and follow the Oregon Public House and the Riverwest Public House on Facebook for updates.