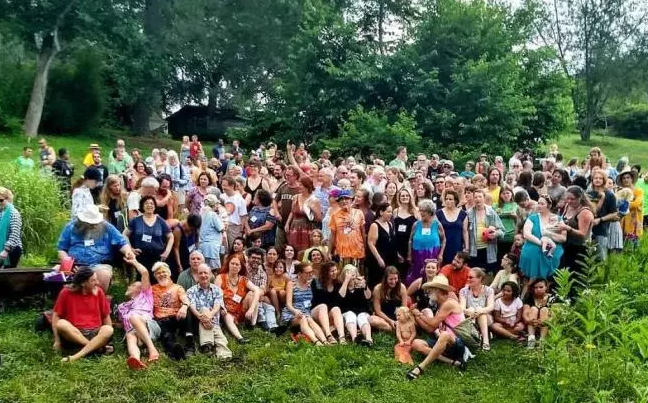 When Twin Oaks was founded (in 1967), they thought a revolution was possible in their lifetime and one of the purposes of Twin Oaks was to show how people could live after the revolution.

Another founder, Kat Kinkade, wrote (in her book, A Walden Two Experiment): “When we first came here we knew nothing of farming or any other way of making a living, other than working for wages in the city.  Some of us had never even done that.  What we did know is what kind of world we wanted to live in.

“…the central idea of the Community has not changed.  We are still after the big dream–a better world, here and now, for as many people as we can manage to support.  More, a new kind of human to live in that world: happy, productive, open-minded people who understand that in the long run, human good is a cooperative and not a competitive sort of thing.”

And, slowly, the influence of Twin Oaks began to create that kind of world, at least on a communal level.

In a piece in Communities magazine’s most recent issue (Summer, 2017), Laird Schaub wrote about the founding of Sandhill community:  “In February 1973 I was in a public library and happened across the current issue of Psychology Today.  It included an excerpt from a new book by Kat Kinkade, A Walden Two Experiment.  It described the first five years of Twin Oaks Community, and it changed my life.  …

“Because Twin Oaks was the inspiration and because I’d already done a fair amount of work to reject materialism, we set up Sandhill as an income sharing community, where all earnings would be pooled.”

Around the same time, at Twin Oaks, they were having problems with getting more people than they thought they could support.  Kat Kinkade tells the rest of the story in her book, Is It Utopia Yet?

“Twin Oaks closed its doors.  It had as many people as it could comfortably hold.  …

“I would gladly have lived in a tent, eaten in shifts, and built sewage treatment on borrowed money, in order to see Twin Oaks answer the challenge of that supply of potential members.  I saw that lineup at our front door, people people eager to join, possibly hundreds of them but certainly dozens, and my response was a whole-hearted welcome–more than that, an excitement, a sense of grabbing history by the tail, a promise of a future community on a scale approaching Walden Two.

“… The rest of that story is the history of East Wind.  I left Twin Oaks, taking two members and some visitors with me, and we set out to form another community which would be like Twin Oaks in every way except one: we would never close our doors!”

East Wind, like Twin Oaks and Sandhill, continues to this day.  But Kat left East Wind after five years, spent four years working in Boston, and then returned to Twin Oaks.

In 1993, Twin Oaks was faced with another long waiting list.  Kat Kinkade wrote (again from Is It Utopia Yet?):  “In some ways it feels like 1972 all over again.  The big difference is that this time I’m not alone in feeling the urgency of the problem. …

“The only politically practical solution I could see was to start another community, the same conclusion that had, years ago, resulted in the founding of East Wind. …

“It took eight months to accomplish this.  Two other communitarians, Gordon and Ira, joined me in an informal committee to get the new group off the ground.

“… Gordon’s untiring research eventually netted us a rundown but potentially beautiful farm about seven miles from Twin Oaks.  Thanks to Ira’s efforts, Twin Oaks consented to let the potential members have two gatherings…

I’ve quoted a lot from Kat Kinkade, and she might have exaggerated her importance in the founding of all these communities, but it seems clear that Twin Oaks directly influenced East Wind and Acorn, and indirectly Sandhill.

When I was at Acorn, I found out things did not go smoothly from the founding.  Apparently, at one point they were down to six members and later went down to two members.  (Acorn currently has almost thirty members and is thriving.) When I asked someone who had been a long time member at both Twin Oaks and Acorn how Acorn had survived, I was told: “Two things: Ira and Twin Oaks.”  Ira Wallace is amazing and determined, but Twin Oaks, having been instrumental in founding Acorn, was not going to let it die.

Not all communities make it.  Two of the newer communities that were featured this past year in Commune Life haven’t succeeded.  Quercus is gone and Sycamore Farm is no longer in southern Virginia.  The founders of both of these communities have told me that they’d be interested in writing the story of what happened, when they get time.  (A line that I’ve heard from many busy communards.)

Then there was the Dandelion community in Kingston, Ontario, which was influenced by Twin Oaks, and founded in the 1970s and disbanded around 1990.  I would love to have the story of what happened there.  Nevertheless, Commune Life has been able to have pieces on two current Canadian income sharing communities, The Common Unity Project and le Manoir.

And there are a bunch of new income sharing communities in the US.

There’s Oran Mór, which is near East Wind in southern Missouri, and the Stillwater Sanctuary/Possibility Alliance, near Sandhill Farm in northern Missouri.  And there is Compersia, in Washington, DC, which just celebrated its one year anniversary in March.  It is the first community spun out of Point A, which is a project that was founded by some Acorn and Twin Oaks members.

And all this traces back to the founding of Twin Oaks, fifty years ago.  Yes, there is a longer, wider world communal history, which the folks at las Indias sent us some of.  And, yes, there were income sharing communities in the US long before Twin Oaks.  (Though, sadly, Oneida and Amana have been gone for many years.)

But Twin Oaks is now fifty, has a hundred members, and is going strong.  For the people who question whether another world is truly possible, I say, “Yes. Look at Twin Oaks.”

One Reply to “Fifty Years of Commune Life”

Congratuations on your 50th year! From La Comune di Bagnaia (founded in 1979)… we probably should have exchanges of some sort ,I’d love to hear more about how you helped set up other communes…