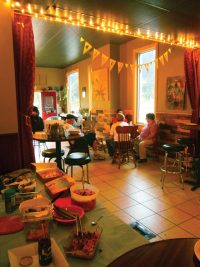 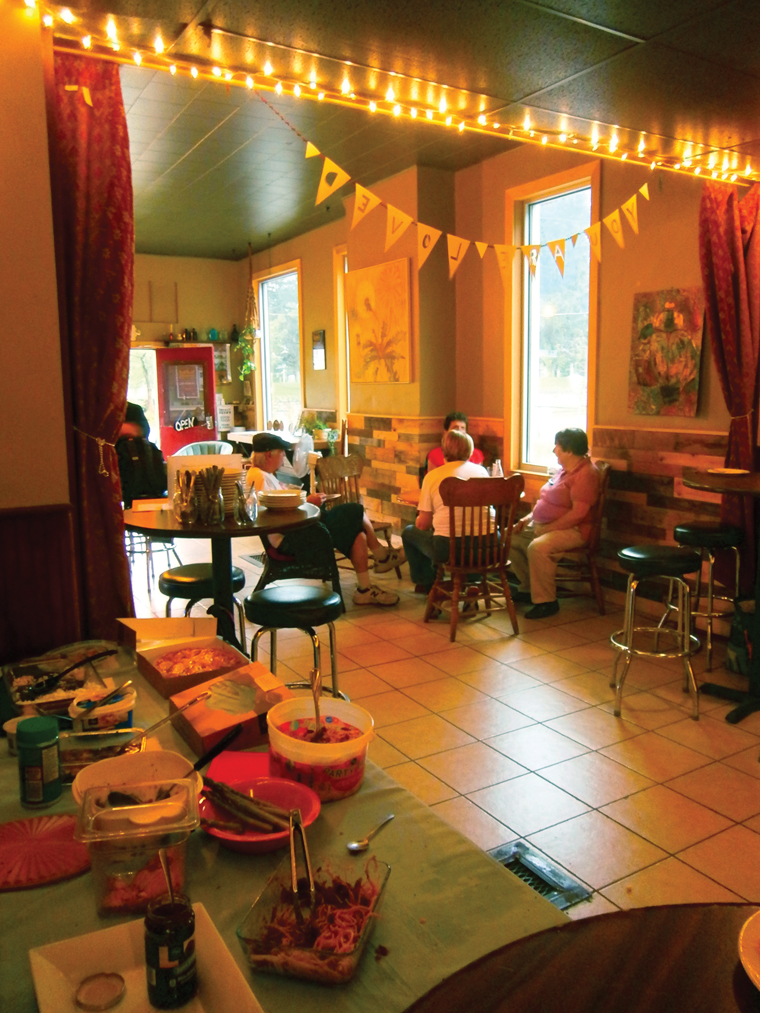 Last year we bought a bar. It had been a family bar for over a hundred years, until about eight years ago. The bar had become a haven for drugs, shootings, and police runs. The Enright Ridge Urban Ecovillage had the chance to purchase the building and liquor license, and so we now own the greenest pub in Cincinnati. It went from Paradise Lounge to its new name, Common Roots. We select local and organic drinks as much as possible. We are now open three nights a week from 7 to 12. Open mic night is on Thursdays, and other events happen on many other nights. This was a major purchase, made in our 12th year.

I’m getting ahead of myself. Back to 2004 when we began the ecovillage…

Imago is an ecological education organization founded in 1978. We reached a point at which we felt that we needed to live our values. After a number of attempts, we decided on developing an ecovillage on Enright Avenue, where Imago has its center and where we had a number of residents who supported our work. We also saw this as an opportunity to create an example of how we can live ecological lives in the city.

Our belief is that humans need to stay in the cities. Moving out of the cities would destroy the ability for other species to have places to live and would reduce the farmland that we require for food. We also have numerous houses and established infrastructure already existing in the cities. For ecological reasons, we need to keep these structures and use them rather than tear them down and start over with virgin lumber and other materials. We need to convert our present cities.

As an ecovillage in an existing neighborhood, with existing housing, we had the potential to form the ecovillage fairly quickly. The night we met in June of 2004, the ecovillage began. We didn’t have to wait and find a site or plan for the site development or find financing and then build—we just started. The buildings were all here. The people who came together already lived in the neighborhood. So, we could just begin.

This isn’t to say that everything was easy. We live in a neighborhood with many other people. We had to convince them that it was a good thing for this to be an ecovillage, even if they weren’t interested in ecology or in community. To this end we put out a monthly newsletter and did an exercise called “Treasure Mapping” as a way to help people realize we weren’t trying to pull the wool over their eyes.

The newsletter consisted of a “gossip column” about people in the ecovillage, coming events, what the ecovillage committees were doing, educational pieces, and problems that might exist in the neighborhood. Many people contributed to the newsletter. It wasn’t fancy, but it was informative.

Treasure Mapping is a way of encouraging people to give input. We took two sheets of 4′ x 8′ plywood, cut them in half and made a 4′ x 4′ box. Each side had a different question in terms of what they wanted to see in the ecovillage, in regards to: Housing, Marketing, Family, and Greening the Ecovillage. In the newsletter and then two handouts, we let people know about the event, the date and times. Enright is 3/4 of a mile long, so a little hard to communicate within. We loaded the box on the truck. In advance we had divided the street into eight sections with eight to 10 homes in each. We had “ambassadors” who passed out the fliers about the event, and when we came to their section they went door to door to encourage people to come out. On a Saturday morning we went around to each section, pulled the box off the truck, put it on a table with magazines and scissors, marking pens and blank sheets of paper so that people could create a collage around what they would like to see within our four topic areas. Over 2/3 of the homes were represented. When completed we took the box back to the Imago Earth Center, and invited people to help decipher the information on the collage. From this we developed Task Forces to work on specific areas.

This was our beginning.

We were incorporated as a nonprofit in 2007. We needed a board of directors. Since 2007 we have gone through two board structures. The first was to invite everyone in the neighborhood to be part of the board. While this was a good idea on paper, few people came to the board meetings. The second structure saw elected officers and the chair people of our Task Forces (now called committees) making up the board. Anyone could come to board meetings and be part of the meeting. However, if there was a controversial item, the board members alone would decide, by consensus, on this decision.

The neighborhood has become a desirable place to live, so there is little opposition. A rough estimate gives us about a third of the ecovillage involved in the ecovillage, about an additional third open to thinking of themselves as part of it, and about a third indifferent.

But there are struggles…

We have had a good number of young families move into the ecovillage. This has been exciting. However, with family demands it is hard for some families to really get involved. We also have the struggle of separation and divorce with families in the ecovillage. This is especially difficult when the families have been deeply involved in the ecovillage. In most cases both parties are loved and respected. Figuring out how to relate to the two parties is especially challenging when they have become a major part of the community. We aren’t aware of any formula for this. It seems to be different in each case and relationships are different in each case both within the family and within the community. It does create major stress in the community. While we haven’t had a big problem with people siding with one or other of the couple, experiencing their pain and filling holes that are created by their frequent withdrawal from their role in the community are huge. The board especially has had to struggle when members of the board have chosen to leave or take a leave of absence.

We have also struggled with people working for other residents in the community. People have hired their fellow community member to do work for them, and sometimes they are not pleased with the work done. There have been cases where mediation was used, while other times feelings of resentment fester. At one point the housing committee decided not to hire people in the neighborhood to do any of its rehab work. Although this seemed like the opposite of what one would want in an ecovillage, where we should be providing for each other and supporting each other, there is little doubt that this will remain an issue that needs to be dealt with on an individual basis, especially in an ecovillage where the majority of people have not bought in to being directly involved in the ecovillage.

While there are major issues, the majority of residents of the ecovillage revel in the gathering of such wonderful people forming the village. We believe it is a huge improvement in the way people live over most neighborhoods in our cities. It both forms community and provides an ecological framework for living in the city. Many of us see our efforts as a real demonstration of how we can live better in our cities. A lot of exciting things have happened:

The purchase of the Common Roots Pub: the pub is as green as we can make it, and is run totally by volunteers.

Our ecovillage CSA provides households with food every year. We are now in our ninth season and are running strong. The CSA food is grown in backyards, lots, and any other available land in and near the ecovillage. The trip to pick it up isn’t far for the shareholders, just up the street.

The weekly potluck—at the pub—is an opportunity for people to come together to share in great conversations, good food, and green drinks. It is also on Thursday evening, which is Open Mic night at the pub. Once everyone is full, they can stay and listen to some great music.

The woods around the ecovillage provide a wonderful place to hike or just sit and connect with the other residents of the ecovillage, our non-human residents. We are only seven minutes from downtown Cincinnati, but have some 200 acres of woods and greenspace surrounding us, with a mile-and-a-half trail leading through it.

We also have Imago in the ecovillage, which was the impetus to starting the ecovillage and remains a mainstay. Its 40 acres of preserved land and building are key assets for the ecovillage.

These are a few of the things that make our ecovillage a good place to live. At this time only our head farmer in the CSA is paid, with most all work in the ecovillage carried out by volunteers. While there are always opportunities for more people to be involved, we have established a solid group of people who are passionate in helping make the ecovillage work.

Jim Schenk helped start Enright Ridge Urban Ecovillage (www.enrightecovillage.org) and is an avid promoter of the retrofit urban ecovillage. As mentioned in the article, he has completed a book on the Enright Ridge Urban Ecovillage as a model for making our cities sustainable, and is seeking a publisher. (Any suggestions?) He is available for consultation. Contact him at jschenk [AT] imagoearth.org.

Filed Under: All Blog Posts, Communities Articles, Community Where You Are, Issue 177, Sustainability