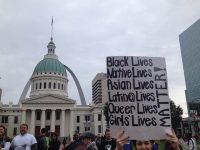 Combating Racism, One Community at a Time 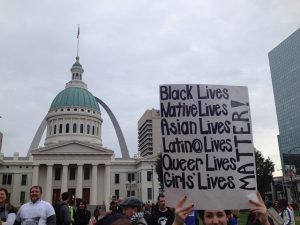 “Where are all the people of color?” This question has come up frequently at gatherings during my 20 years with the Catholic Worker (CW) movement, a network of faith-based intentional communities that focus on direct service (often hospitality to the homeless) and justice work. Our current movement seems to attract largely white, middle class folks (myself included), and while our lack of racial diversity has been noted, we haven’t made a lot of progress in becoming more inclusive. In the past few years, CW communities in St. Louis and throughout the Midwest have been doing some exciting (and scary!) work examining ourselves, changing communal structures, and reaching out to become more anti-racist communities.

For white folks, dismantling white supremacy first requires an honest reckoning with ourselves as both individuals and communities. This work can be vulnerable, messy, and painful and needs to be an ongoing process. Secondly, it requires white-dominated communities to build relationships and concretely support organizations led by people of color, using the resources at our disposal—property, finances, a broad network of support, newsletters, and other means of communication—to uplift the work these groups are doing. These are two essential “feet” of anti-racism solidarity, and cannot be done well in isolation from each other. If we try to engage in action without first examining the damage our own whiteness and racism has done to us as individuals and communities, our efforts will be surface-level at best, and can do real damage at worst. Alternately, if white people remain in the realm of navel-gazing without taking action, we can end up becoming paralyzed in our own self-righteous anxiety. I’ll recount some concrete examples of both of these strategies.

After the murder of Mike Brown and uprising in Ferguson, our communal energy in St. Louis expanded to join and support the Black Lives Matter movement while we continued to do hospitality. A shift occurred for us during this time; we gained a new urgency to directly confront the racism present in our own community and in our larger movement. Looking inward, we began revisiting our founding principles through a specifically anti-classist, anti-racist lens. This process helped us understand more deeply why our movement is largely one of white, middle class, able-bodied people. It has been important (and painful) to acknowledge that something about our mission and the way we practice it makes us appealing to a very narrow (and socially privileged) group of folks, despite our own sense of being a radical movement. In re-reading our foundational documents and mission, we asked the questions, “Who would this speak to? Who does it explicitly welcome and unintentionally exclude? How have these ideas been interpreted by our friends who are not white or middle class?”

We were very nervous to talk about simplicity and voluntary poverty, because they are central tenets of our movement. As we talked about both the ideal, and the current practice of it in our own community, we asked: Does our practice of simplicity presume that members begin with some level of material wealth? In what ways does “downward mobility” appeal only to those who have experienced a life of financial stability? How do poor and working class people interpret this value? Does our practice of this value acknowledge the differences between voluntary downward mobility for middle class folks, and achieving economic stability for poor and working class folks?

We also looked at our writings on nonviolence, a central principle of the Catholic Worker since its inception. In the midst of the Ferguson uprising here, and the Black Lives Matter movement nationally, our community has heard the feedback that people of color are fatigued and angered at white people trying to dictate how they should respond to racist oppression. We’ve also noticed the ways that the term “nonviolence” has been used to silence the voices of people of color to actually promote the status quo. We also see that the behavior that white folks label as “violent” is very often a reflection of a culturally-white practice of politeness and compliance with police and state power. Speaking for myself, adding these nuances has been vital to my growth as someone who seeks to exist in the Catholic Worker movement and also be an accomplice/ally to our local Black Lives Matter movement.

It’s often difficult for white people to recognize how racism may be playing out in our communities. All communities have a specific culture: expectations, assumptions, shared values, beliefs, and symbols that are generally accepted without too much thought. We create culture out of our own socialization, experiences, and identities that we bring to community. Culture is powerful precisely because it affects everything from an underlying level, like the air we breathe. Our community has used the following list of ways that white supremacy shows up in the group culture to help us unveil how racism is operating in our community. This tool is from the Catalyst Project and Criss Crass, with summaries created by the St. Louis Anti-Racism Collective. As a mostly white community, we have come to understand that external tools like this are essential to help us become more self-aware in examining our practices and underlying assumptions.

This phenomenon happens when “white” is considered standard and normal, and we assume that most people have had similar experiences. In intentional communities, white folks can view their way of doing things—organizing styles, meeting culture, style of communicating, and living practices—as normal and average, just “the way things are.” In this dynamic, white folks may react poorly to suggestions, challenges, or different ways of doing things from people of color. Some questions to ask about your community:

De-racialization involves removing an issue from the larger context of racism and failing to challenge the impact of racism on that issue. De-racialization restricts the self-determination of the people who are most impacted by that issue to define their own struggle. This term was developed by Critical Resistance, a prison abolition organization. Some questions to ask about your community:

In the dynamic of contradictory resistance, white folks work to end oppression but simultaneously fight to maintain the privileges they have. This can look like fighting to maintain positions of power in an organization. It can look like white activists sacrificing the goals of activists of color in order to win short-term gains for their own agenda. One example of this is when white leaders ignore the asks of organizers of color and prioritize their group’s perceived reputation by “playing it safe” or avoiding the appearance of being “too radical.” Some questions to ask about your community:

Centered on the White

This is a dynamic of white activists ignoring or misunderstanding the resistance coming from communities of color. Five-hundred-plus years of liberation struggles on this continent have been led by people of color, from colonization through today. The idea of “recruiting” people of color into “the” movement (defined as white radical struggle) ignores this historical and contemporary reality. Some questions to ask about your community:

As we move from introspection to action, knowing that the two are both ongoing, constant, and self-feeding processes, I’ll give some examples of recent actions taken by Midwest Catholic Worker communities. These communities, most of which are majority-white, are doing work to address their own racism, change their structures, and support local groups led by people of color.

White folks (myself included) in majority white intentional communities must reckon with the ways that racism has isolated us and limited our communities. Our radicalness, good work, and good intentions do not make us immune from racism. Geographical proximity to communities of color does not automatically grant us the badge of “anti-racist community.” Our sense of being countercultural should not morph into an arrogant delusion that we are not influenced by white supremacy. This engagement requires vigilance, vulnerability, and bravery. And our liberation as white people absolutely depends on it.

Author acknowledgments: I’m grateful to Brenna Cussen Anglada, the current and past members of the St. Louis CW community, the St. Louis Anti-Racism Collective, and Annjie Schiefelbein, all of whom contributed ideas, editing, and content for this article.

Links to all of these resources can be found at the St. Louis Catholic Worker website at newsite.karenhousecw.org/ic

“On Showing Up, Staying in our Lane, and Doing the Work that is Ours: 8 Guideposts for White People Supporting Black Lives Matter” by the St. Louis Anti Racist Collective

“Racism in our Communal Structures: A Community Assessment Tool” by the Western States Center

“Decolonizing Together: Moving beyond a politics of solidarity toward a practice of decolonization” by Harsha Walia

One Reply to “Combating Racism, One Community at a Time”

I’d love to hear more from people of color who were the first non-whites in their community. I feel like I’ve had a lifetime of thick skin against open racism, and as such I’d rather deal with hate than to be a token.

With so many communities hungry to diversify, it puts so much pressure on the first person(s) of color to enter a community because they are the best tool for attracting more racial diversity. If my goal is to diversify a community, then great. Being the first PoC is the best way to do that. But if my goal is to live simply and be treated like everyone else, well, I’ll take racial hate over tokenization any day of the week.

The only way I know of avoiding both is to join a community that already has PoC.