Race, Class, Gender and Climate Change: An Excerpt From Together Resilient by Ma’ikwe Ludwig 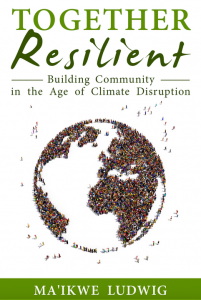 This post is an excerpt from Together Resilient: Building Community in the Age of Climate Disruption by Ma’ikwe Ludwig, published by The Foundation for Intentional Community.

Climate change is deeply intertwined with race, class and gender. I’d like to focus on the who of different roles we are all playing in the crisis.

First off, note what countries have historically contributed the largest amount to climate change. Essentially, this is wealthy nations whose political systems are dominated by white people: the US, Canada, Europe and Australia. It is both the inventions of white people (the combustion engine most notable in this) and the high-consumption cultures and habits of the western, white world that have landed us where we are today.

Certainly not everyone who lives in these countries are white, but note who controls both the political dialogues and economic agendas in these places. Note as well that the resistance to the policies of heavy consumption of fossil fuels have come most strongly, the world over, from indigenous people, who are neither wealthy (in the ways we typically conceptualize wealth) nor powerful.

Now look from the other end– the impact our actions have had. The places in the world that have thus far taken the brunt of climate effects are largely poor, brown people: witness Syria, India, Thailand, the Maldive Islands, Brazil, China, and within the US, heavily Hispanic Florida, heavily black New Orleans, and Louisiana as a whole, one of the poorest states in the country.

Louisiana’s lost land is particularly illustrative of climate dynamics. D. Phil Turnipseed, the director of the US Geological Service National Wetlands Research Center, calls Louisiana’s shrinking profile “the worst environmental and socioeconomic disaster in North America.” Approximately 1,900 square miles of land mass have disappeared from the familiar boot shaped map of the state, according to the USGS. (1)

When you look at the currently accurate map it is shocking—it’s about 1/3 of the state, gone. Those places in Louisiana where the wealthy have been hit as strongly as the poor, the recovery efforts have been disproportionately going to the wealthier places and neighborhoods, according to the National Housing Institute.

In short, climate change is a problem largely created by (relatively) wealthy white people, and it is a crisis most strongly affecting (relatively) poor brown people.

And many of the potential solutions to climate change are almost as bad from an economic justice standpoint. A flat out carbon tax would be regressive and make it even harder for poor people to manage the most basic things such as getting to work and putting food on their family’s tables (2). The geo- engineering solutions, when you look at them closely (if they worked at all) are most likely to make the global north safer, and deflect the worst disruptions onto the global south, basically reinforcing the systemic racism and classism that exists at a global level between countries (3). Switching over to small-
scale organic agriculture is a terrific idea… for those who can afford it. Without making major changes in the subsidies and regulatory frameworks, it’s an idea that will contribute to more hunger among the people who are already the most vulnerable.

Class-regressive policies also disproportionately impact women, especially single women who are parents. And climate change is already hitting women harder than men in many places. According to the UN, women are usually much harder hit by natural disasters and less able to access relief afterward.

In one particular UN study in China (where climate change has already hit harder than in most places in the world) women make up 70% of the agricultural workforce (which has already been seen to be an especially hard hit population in other countries) and have less access to other work opportunities, land, technology and loans which would make that easier to manage. They also have less knowledge of emergency plans than men. And that’s just one example of how this growing crisis plays out along gender lines.

Bottom line is that we can’t solve the climate crisis without simultaneously looking deeply at racism, sexism and economic injustice. And that means work: hard work to root racism, sexism and classism out of both our individual consciousnesses and our collective culture and systems.

Black Lives Matter has done an amazing job of bringing a lot more attention to race issues in the US, and doing it in a way that is unapologetic, clear and invitational for others to join in. Activists like Van Jones have long been drawing attention to the links between race and the environment. We have a long way to go following the lead of people of color, and for us white folks, stepping up to the plate as allies and partners in dismantling a system that we continue to benefit from.

Classism is a few decades behind on having a very visible movement and a clear articulation of what classism means. Outside of the socialist circles in the US (which have gained some strong acceptance, approval and even enthusiasm among the wider public in the past year; thank you, Mr. Sanders) and income sharing, egalitarian intentional communities, it seems that there has been a lot less work being done to articulate what classism means. As economic justice organizations, many of whom are members of the New Economy Coalition, gain more public presence, we need to get very articulate about the effects of economic insecurity and classism on all of us, as well as what solutions we can put into place to build that new world.

And we also need to develop a strong theory of what Matt Stannard of Commonomics USA calls climate egalitarianism: finding the solutions to the climate crisis that do not further endanger the poor, and do not rely simply on the goodwill of wealthy people via redistributive economic programs like welfare.

Instead we need serious restructuring of the fundamentals of our economic system, developing policies and cultural practices that embody both climate responsibility and economic equality and justice

The intentional communities movement has a role in all of this. Essentially, we are offering a platform in which deep issues (like race, class and gender) can be both dialogued about in a mature, deliberative way, and can be worked on through creating a new system with different power relationships between groups and individuals than our current ones.

But the movement can only do that if it takes on its own internal anti-racism and anti-classism work.

Many intentional communities have simply replicated the wider culture norms and thinking when it comes to race and class. I have some real hope, however, that it doesn’t have to be that way.

Some of that hope comes from the work of communities like the Catholic Worker Houses. This network of 245 intentional communities around the world was shaped by the work of socialist and Christian Dorothy Day. Day is best known for her activism in the 1930’s around economic justice during the Great Depression. Today, the communities she inspired “remain committed to nonviolence, voluntary poverty, prayer, and hospitality for the homeless, exiled, hungry, and forsaken. Catholic Workers continue to protest injustice, war, racism, and violence of all forms.”

The anti-racism group I was a part of along with another dozen communitarians from northeastern Missouri worked in part from materials developed by the Catholic Workers in St. Louis, MO. This network continues to be at the front edge of justice work in many cities around the country and don’t seem too inclined to rest on old work so much as engage in developing new tools for both communitarians and non-communitarians alike.

So yes, I have hope for the intentional communities movement playing a deeper role in racial and economic justice. I think it aligns well with the fundamental nature of community, even while it means questioning some of how our communities actually operate. We do not need to be perfect embodiments of this to contribute (that need for perfection before acting is an ego trap that lots of activists fall into) but we do need to be brave enough to recognize the importance of the work, and that it is not at all tangential to what we are doing in the movement, but rather very much central.

My hope stems in part from seeing the preponderance of women in leadership and visionary work within the communities movement: we have made major strides in creating a different culture around gender, and we can do the same thing in these other areas. Not that we are done with our work around gender, by any stretch of the imagination. I know of any number of communities currently grappling with deep gender dynamics, as well as ones who haven’t yet reached the “grappling” stage.

As discussed earlier, income sharing groups have made especially good strides by undoing some of the economic underpinnings of sexism in our system—in other words, by valuing “domestic” labor equally with “income” labor, income sharing groups enjoy a significantly leveled playing field between men and women, and even in the least conscious of these communities, there’s a palpable difference in respect and valuing of women. Still, rape culture and other dehumanizing aspects of the wider world permeates a lot of places, including our otherwise relatively safe and progressive bubbles of intentional communities.

1 Information and quote from Brett Anderson in the Matter blog, Sept 8, 2014

2 An innovative version of the carbon tax comes from Citizen’s Climate Lobby, who advocate for what they call “carbon fee and dividend”. It would return all collected monies directly and equitably to the American people, helping to alleviate the regressive nature of the tax while getting the benefits of encouraging lower carbon consumption.

3 This analysis is thoroughly laid out in This Changes Everything, pp 273-275, Naomi Klein

Like this excerpt? Read the full book by ordering Together Resilient: Building Community in the Age of Climate Disruption.