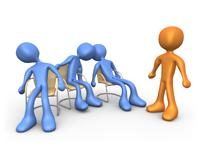 In the opening story of “Busting the Myth,” the facilitator at Green Meadow tests a block for legitimacy. When the block is found invalid, then the proposal goes through and is adopted. Here’s the curious thing: Diana says this group had tried that only once before and never did it again. When i read this, i wanted to know: Why not?

Let’s leave aside for a moment the questions of consensus process and decision rules. As a community consultant, i often hear from groups who are struggling with a perceived problem member, someone who acts out in a way that others find abusive or over the line. Someone from the committee who’s been assigned to find a way out calls me on the phone and tells me their tale of woe. I duly sympathize (hey, i’ve been there too, i know how hard it is). And then, after they hopefully feel heard by me, i ask: “So when this person does these problematic behaviors, how does the rest of the group respond?” The answer is inevitably some type of conflict avoidance…which generally makes it clear that the community is co-creating the problem.

Want that person to behave differently? Give a different response.

The response i’ve seen succeed most in shifting these dynamics is both compassionate and direct. It takes multiple members offering honest feedback, so don’t give up when the first try does not have a perceived effect, as you are laying the groundwork for later shift. Your group needs to back each other up on this, standing up for the kind of community you want to live in, and refusing to allow yourselves to be bullied or intimidated.

If the more sensitive or vocal people who tend to step forward first get blown off by the problem member, then other people need to engage. Often the most successful interventions are by more middle-of-the-road members, perhaps a few people who are typically a bit quieter, well-respected, or hold some eldering energy in the group. Unfortunately, many groups allow their fear of being a lynch mob to divide them—and lose good members in the process—before arriving at unity on this and eventually taking appropriate action.

Returning to Diana’s concerns regarding consensus practice, i agree that for groups who are struggling with dysfunctional consensus process, the biggest culprit is usually inappropriate blocking. This problem is pervasive enough that it gives consensus overall a bad rep. That’s unfortunate, because the heart of the process is not about blocking, it’s about listening to each other well and finding the best path forward together. Nonetheless, given that we come from a culture glorifying individualism instead of teaching us to collaborate well, it’s essential that every consensus system include a way to rein in inappropriate blocks. Blocking potentially gives tremendous power to one or a few individuals, and the only way for that to function successfully is with a check and balance.

I advocate for doing this through the cultivation of both culture and procedures. The culture piece is conveyed, for example, through the shared mantra, “If you’ve blocked consensus half a dozen times for all the groups you’ve been a member of, you’ve used up your lifetime quota.” If you provide a good orientation to the decision-making process for all incoming members (including how a constructive culture is fostered at meetings), the results will pay you back a hundredfold.

The procedural piece can take a variety of forms, depending on the system. Diana cites at least three examples: the Formal Consensus method of asking a group whether a block is legitimate, N Street’s requirement that blockers convene meetings to work out an alternative, and the institution of a supermajority voting fallback. Although there are plenty of earlier examples, Quakers are thought of by many as originators of consensus practice and have been quite influential. What many people don’t realize is that Quakers also give their facilitators the power to overrule any block perceived as inappropriate, even if it comes from two or three members (see, for example, Pacific Yearly Meeting’s Faith and Practice book).

Rather than giving unanimity or consensus without recourse its own name as Diana does, i simply assume that in order for consensus to function well there must be a robust response to bad blocks. When the cohousing movement started in the 1990s, in order to access conventional lending their communities put supermajority fallbacks into their bylaws to satisfy bankers. As a consensus practitioner i worried about this at first: with a voting option in place, would these groups still do the patient work of sorting through differences to arrive at genuine consensus? More than a decade later, experience has shown me that cohousing groups work just as much as other groups at coming to decisions everyone can support or at least live with, and their voting fallbacks are typically invoked only rarely in the course of years. Nonetheless, they are there if needed.

I agree with Diana that consensus-based groups can also have other problems, like stagnation, power struggles, decision by endurance, and premature proposal death. I’m not sure those problems are necessarily worse in consensus groups than groups with other decision rules (goodness knows we see enough bad examples in society of poor decision-making process regardless of whether majority vote, consensus, or some other system is used). But let’s acknowledge that these are real concerns, and pledge to make improvement.

Healthy groups build a spirit and culture that honors new ideas and alternatives rather than shooting them down. Power struggles and other differences can benefit from being acknowledged and skillfully worked with. Agendas should be created mindfully and time limits honored sufficiently so that people can give thoughtful consideration to the issue at hand. And when groups tell me they are struggling with meeting attendance, i have a standard answer: If you want people to show up at meetings, then talk about things that matter and talk about them well.