We Built a Village

We Built a Village is a part memoir, part sociological analysis that probes the differences between commons and markets as one of the oldest cohousing communities in the US.

We Built a Village:

Cohousing and the Commons

As both a memoir and a sociological analysis that probes the differences between commons and markets, it is unique among books about cohousing. When a group of people began in the early 1990s to plan their cohousing community, they set in motion a counterpoint between the physical spaces and the social configurations that would guide their lives together, even up to creative responses to the recent pandemic.

Diane Rothbard Margolis is a founding member of Cambridge Cohousing where she has lived for more than twenty years. She is a former member of the Coho/US Board of Directors and co-founder and Director Emeritus of the Cohousing Research Network. She was a fellow at the Radcliffe Institute for Advanced Study 1980–1981. She has published many research articles, and her books include The Fabric of Self, which won Honorable Mention at the First Annual Book Award of the Eastern Sociological Society. She is Professor Emerita of Sociology at the University of Connecticut.

Praise for We Built a Village

“The Diane Margolis’ rendition of cohousing is a very human one, and overdue. Putting together a custom high-functioning neighborhood is never simple, and this book does not shy away from the complexities. But getting these communities together is getting easier—the foibles are fewer because of stories like this—and one day cohousing will be the norm, not the exception.”
~ Charles Durrett, architect, AIA, and cofounder of cohousing in North America

“With a background as an author and sociologist, Diane Margolis has been an early pioneer and leader in the cohousing movement in America. She has a deep understanding of the social process critical to the creative and successful development and evolution of cohousing communities. I definitely recommend her book, We Built a Village.”
~ James W Leach, President, Wonderland Hill Development Company

“This book takes us back to the formation of the first cohousing communities in the United States, when ordinary people (not just architects, developers, and planners) decided they wanted a different kind of neighborhood where they collaborate with their neighbors on a daily basis. That Cambridge Cohousing, along with hundreds of other communities, is still thriving shows that Americans are looking for something the housing market is still not providing—authentic community. The book illustrates how people without “a leader” or shared spiritual practice can create strong enduring communities that attract their next generations of residents and stand the test of time. I am particularly intrigued by Diane’s discussions of how Americans struggle with private property rights vs the commons, conflicting values deeply embedded in most of us.”
~ Kathryn McCamant, President, CoHousing Solutions; cofounder of cohousing in North America

Deepen your education with Cohousing! 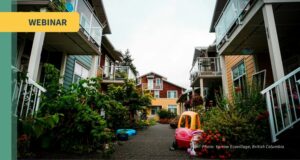 ake your learning to the next level by joining one of our 5-week courses.
Adapting the Cohousing Model: Pushing the Boundaries of Community Development explores best practices for developing cohousing communities and identifies where the cohousing movement is headed.