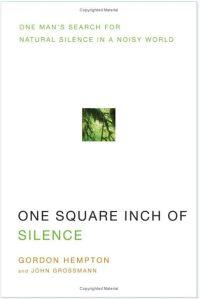 One Square Inch of Silence: One Man’s Search for Natural Silence in a Noisy World
By Gordon Hempton and John Grossmann
Free Press, New York; Hardcover, 2009; paperback, March 2010; 368 pages plus enhanced CD with soundscapes and photos

Some would accuse Gordon Hempton of being an idealistic dreamer, a man obsessed with impossible goals, an advocate of standards he himself can’t maintain, a tilter at windmills. (And he does, in fact, tilt at a windmill, or at least measure its one-minute average noise at 50 decibels, when he stops near it in a Nebraska grassland.) But dismissing him and his attempts to defend and restore natural silence as “impractical” and “unrealistic” seems like a too-easy form of denial.

Hempton is the creator of One Square Inch of Silence (www.OneSquareInch.org), a project to protect one of the few remaining places on the planet where natural silence (best defined as the full, unmasked, and undiluted presence of natural sounds) reigns: a spot deep in the Hoh Rain Forest, part of Olympic National Park in Washington. Here, human-generated noise rarely intrudes.

“Rarely,” in this case, is a relative term; it means an average of less than one noise intrusion every 15 minutes. According to the author, all but a dozen or so places in the United States experience more than four “human noise events” every hour. Except in that handful of locations, Hempton, an Emmy Award-winning natural sound recordist, typically can’t record anything for more than a few minutes without a plane, highway traffic, a mine, a chainsaw, or some other anthropogenic noise intruding on the soundscape.

Because of the distance sound travels, protecting one square inch in the Hoh entirely from human noise—preserving it as a sanctuary for only natural sounds, in the same manner we protect the unique elements of other endangered ecosystems—would in fact reduce noise intrusion (from such things as jet overflights) for 1000 square miles. After establishing the project and the sanctuary (marked by a stone, a log, and a jar for visitors’ “Quiet Thoughts”), Hempton embarks on a cross-country trip to explore natural and unnatural soundscapes, talk with people about natural quiet and the effects of noise in their lives, and ultimately lobby officials in Washington, DC to enact regulation or legislation to protect the natural sonic environment, especially in places like Olympic and other National Parks. Ironically, the vehicle for his journey is a loud Volkswagen bus, and, to fulfill unavoidable personal commitments, he makes two plane flights back to Washington State during the course of his cross-country journey. He freely acknowledges the irony of contributing to the very noise he is wishing to diminish—an irony which serves, if anything, to highlight, rather than discredit, his observations of our modern condition.

Hempton and co-author John Grossmann write with clarity, natural storytelling ability, a poetic sense, and, most important, an “ear” for the world around them. Reading Hempton’s adventures involving his sound meter, recording equipment, other listeners, random strangers—and, most important and always, what he is hearing, whether bird songs or the Indianapolis Motor Speedway—I found my own awareness of the sounds around me heightened. Through his narrative, Hempton reveals profound truths with which much of the modern world seems to be entirely out of sync—among them, that quiet (freedom from noise intrusion) is essential to our and ultimately every creature’s health and well-being. Those of us who lack adequate natural silence in our lives, who must listen instead to a near-constant sonic backdrop of motor vehicles, airplanes, machines, buildings, electronic gadgets, and various earth-altering projects going on around us, expose ourselves to stresses unknown until relatively recent history. “The day will come when man will have to fight noise as inexorably as cholera and the plague,” Nobel Prize-winning bacteriologist Robert Koch warned in 1905; that day has undeniably drawn nearer.

Studies have shown noise pollution to diminish mental functioning, retard learning, encourage disease, precipitate aggressive behavior, impede the formation and maintenance of social relationships, and generally wreak havoc with us both as individuals and as a society. When asked about it, almost all of the people Hempton encounters and questions on his journey remember a quieter time in the past, and lament the sonic intrusions that have taken it away. Hempton believes that freedom from noise pollution is just as essential to our physical and emotional health, and as inalienable a human birthright, as clean air and clean water. And it is more than that. “Silence is not the absence of something but the presence of everything…. It is the presence of time, undisturbed. It can be felt within the chest. Silence nurtures our nature, our human nature, and lets us know who we are. Left with a more receptive mind and a more attuned ear, we become better listeners not only to nature but to each other.”

Yet most of us are awash in human-generated sound, much of it unwanted by all except those responsible for generating it (and sometimes not even by them). Despite its corrosive effects on both us and the natural world, it has become the almost unquestioned medium in which modern civilization swims. To realize that things could be otherwise is to recognize the extent of our loss. Every creature, including our own, evolved in an environment in which our senses, including our hearing, needed to be finely attuned to the rest of the natural world to ensure our own survival. When artificial stimuli overwhelm, distract, and dull these senses, we lose a very real part of who we have always been as living creatures. We become not only deafened, but deadened. And other animals, who depend much more directly than humans now do on hearing exactly what is going on around them at all times, may find themselves unable to survive, reproduce, or even communicate amongst themselves with such constant noise intrusions.

Most of us have probably never in fact known the type of quiet Hempton describes as occurring at One Square Inch. The closest many of us have come to it may have been in the days following September 11, 2001, when commercial jets stopped flying in United States airspace. To me and to almost everyone I’ve talked with about it, a strange, restorative calm seemed to settle over the land during that period, as we witnessed for the first time in our lives what daily existence without the intermittent rumble of airplanes must have been like. For many of us, the relative quiet was strangely exhilarating, a needed balm after the trauma that had precipitated it.

What does this all have to do with community? In Gordon’s own words (via email), “The presence of quiet is important to communities. The research has shown that not only does noise pollution cause anti-social behavior, quiet allows people to communicate more easily, and be more relaxed, while also maintaining a sense of place.” My own experiences both in and out of community bear this out. While absolute natural silence is an unrealizable (and probably not even desirable) goal when living day-to-day in close proximity with others, assuring that members can find quiet when they need it—and honoring the place of quiet in our lives—can be essential to protecting and maintaining both physical and emotional health. As Hempton points out, adequate quiet allows us to appreciate sound (whether natural or human-generated) and to explore inner and outer worlds that can fill us with gratitude rather than stress. It helps us tune in to our place on the planet and to our own and others’ inner lives, in ways that become almost impossible in the presence of, for example, an active leaf blower.

Helpful appendixes describe the “Top 5 Ways to Quiet Your Home or Office” and “Top 5 Ways to Quiet Your Neighborhood” through savvy technical choices and cooperative measures with neighbors. These methods involve win-win solutions, improving everyone’s lives through applied awareness and intention without suppressing natural human self-expression. In fact, they include throwing parties. “If you want a quiet neighborhood, you need a healthy community,” Les Blomberg of the Noise Pollution Clearinghouse writes. “People tend to noise-pollute anonymously, so don’t be anonymous, and don’t let your neighbors be anonymous either. Get to know them, share tools, car-pool, invite them over. It’s unlikely they’ll wake you at 2 a.m. if they’re going to be your guests at 6 p.m.”

Naturalists and ornithologists will find Hempton’s natural-sound descriptions particularly fascinating, but one doesn’t have to be able to recognize every bird vocalization or the unique sonic signatures of different atmospheric conditions to appreciate the author’s experiences. I recommend this book for its ear-opening stories and perspectives, for its practical suggestions about how to reclaim healthy sound environments wherever we may be, and for the simple wisdom and groundedness it shares on nearly every page, even in the midst of high decibel counts.