Only Part 1 is available in DVD. To view Part 2, select the Vimeo link below.

Visions of Utopia — Experiments in Sustainable Culture — Volume I & II

Visions of Utopia is a great way to experience a sampling of community life “up close.” You can see and hear community members tell their stories in their own words. Volume One of Visions of Utopia Vwas produced and edited by Geoph Kozeny, a veteran community networker, author, and former FIC board member. Though Geoph died before he could complete the editing of Part Two, FIC has completed that work with his blessing.

Watch the Trailer, or Digitally Rent or Download, Visions of Utopia I here:

Visions of Utopia – Experiments in Sustainable Culture – Volume I. from Community Bookstore on Vimeo.

Watch the Trailer, or Digitally Rent or Download, Visions of Utopia II here:

Plus profiles of 7 contemporary communities:

Communities Featured in Visions of Utopia:

This clip is from the segment on Miccosukee Land Co-op (MLC) in northern Florida. MLC member Judith Thompson talks about how Miccosukee cooperates in raising their children and helps them resolve conflict.

This clip is from the segment on N Street Cohousing, where founder Kevin Wolf talks about how community is a deep need for people. 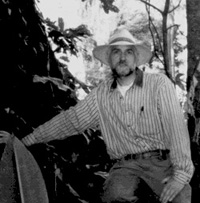 The Visions of Utopia project was launched by Geoph Kozeny in 1997. Although he originally hoped to complete it in three years, his life was cut unexpectedly short by pancreatic cancer in 2007-with the project only three-quarters finished. It turned out to be a much bigger effort than he first anticipated.

Geoph completed Part One of Visions of Utopia in 2002. It offers a concise historic overview of intentional communities, and profiles seven contemporary groups. With Geoph’s blessing, FIC took responsibility for completing Part Two. Working closely with videographers Phil Schweitzer and Douglas Stevenson of Village Media, we were able to accomplish this in February 2009.

Here is what what Geoph wrote as an introduction to his magnum opus in 2006:

Over the past decade I’ve given hundreds of slide shows about intentional communities, and several years ago I completed the first half of a three-hour video documentary on the subject. That was after working for more than four years on this project (it’s grown considerably from the two-hour program originally envisioned!).

I’m happy to report that the following year the Communal Studies Association bestowed upon Part One of the video its prestigious “Outstanding Project of the Year” Award.For all the groups covered, one of the common threads is that each community was founded on a vision of how the members’ daily lives, and usually the world, can be improved.

The visions range widely from self-sufficient living on the land, to land cooperatives sharing resources and close friendships, to spiritually-based groups trying to live more closely aligned with the teachings of their faith. Not surprisingly, the way each group manifests that vision is quite different from the next. For example, I’ve visited a number of Catholic Worker houses, and though based on the same founding vision, no two are alike (and one will be featured in Part Two). The same is true for egalitarian communities, back-to-the-land communities, ecovillages, and cohousing communities–no two are identical.

My personal experience comes from having lived in communities of various kinds for nearly 34 years, and for the past 18 years I’ve been on the road doing networking among many groups. At this point I’ve visited more than 360 different residential communities, so I truly have an “insider’s perspective.”

For a sense of the experience and outlook I bring to this project, I invite you to check out some of the articles I written in recent years. “Intentional Communities: Lifestyles Based on Ideals” is featured in a previous edition of Communities Directory, and I write the “Peripatetic Communitarian” column in the quarterly Communities magazine.“