A Solution to Homelessness in Your Town

A Solution to Homelessness in Your Town is your essential guide to creating non-institutional, more humane building solutions for activists, architects, community organizers, housing developers, and government officials.

A Solution to Homelessness in Your Town:

Homelessness is one of the monsters that haunts our society. Thousands of people are trying to address the challenge but fail to come up with a solution. Valley View Senior Housing, built in 2019 in Napa County, CA, is a VERY affordable community of 70 cottages. This groundbreaking homeless project was organized by American Canyon’s city government, for older homeless people and homeless veterans of the area. This solution-oriented book shares the inspiring story of a compassionate & humane project. Imagine if every city could do one community like this and we can begin to make headway to solve the homeless problem. Every city can do this! And from this we can grow to do even more.

A Solution to Homelessness in Your Town is your essential guide to creating non-institutional, more humane building solutions for activists, architects, community organizers, housing developers, and government officials.

Charles Durrett is an architect, author, and advocate of affordable, socially responsible and sustainable design, and has made major contributions to community-based architecture and cohousing. Charles has designed hundreds of villages in North America and around the world. He is the principal architect at McCamant & Durrett Architects, based in Nevada City, California.

Durrett has been in most major media such as ABC’s World News Tonight, NBC’s Today Show, The New York Times, The Wall Street Journal, Time Magazine, The Los Angeles Times, The San Francisco Chronicle, The Guardian, The Economist, and many other publications, and spoke in front of the U.S. Congress twice, as well as many other venues, mostly college campuses. 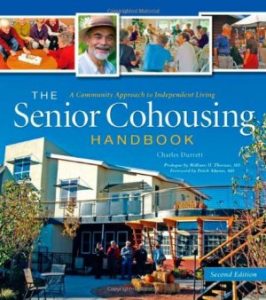 The Senior Cohousing Handbook: A Community Approach to Independent Living